The Story Behind the Mask: A Racing Game For All Suppliers

People flocked to pharmacies to buy masks at the onset of the outbreak of Covid-19. When the basic-form protection is at risk of running out, more new players joined the game. 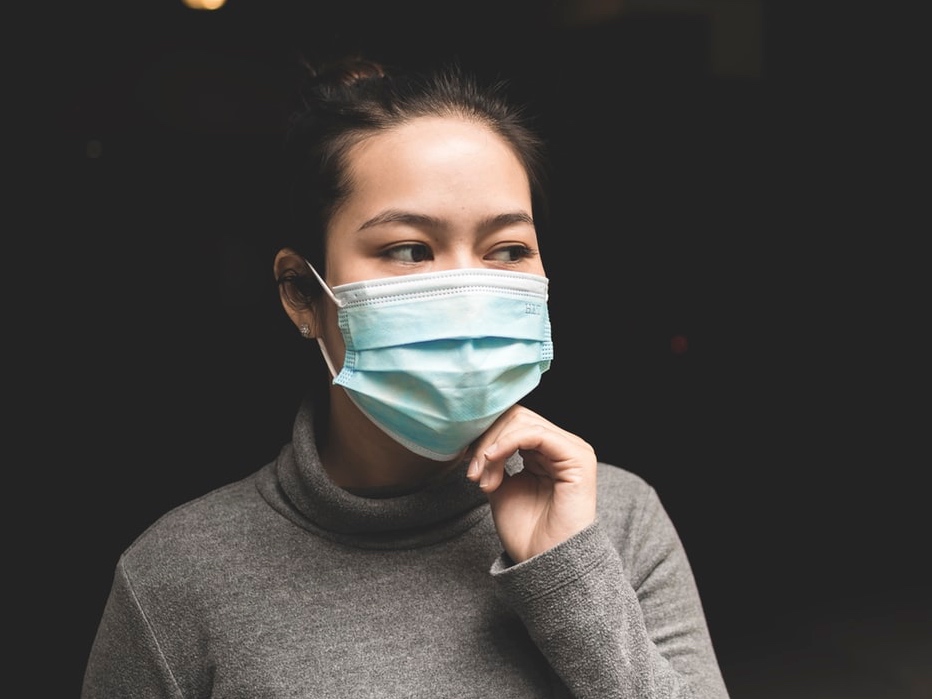 It has been over a month since the outbreak of coronavirus in early January. While most manufacturers are suffering due to the suspension of work, some nimble companies are seeking new opportunities for timely adjustments.

On February 14, the Chinese car-maker, General Motor Wuling Auto (00305: HK), handed over one million self-produced masks to the government and the medical team on the front line. It only cost the car manufacturer two weeks to reorient from an auto producer to a mask supplier. Five days later, Wuling took off its first mask production equipment from the assembly line within 76 hours.

The car industry, as a highly integrated system, could be one of the most affected industries amid the continued spread of the plague. The previous SARS event provided some hints about the potential impact on the mobility industry (see the analysis). Pressured by a lack of dynamics from upstream and downstream, the car sales are forecast to slump 5%-10% in 2020 based on a BCG report. 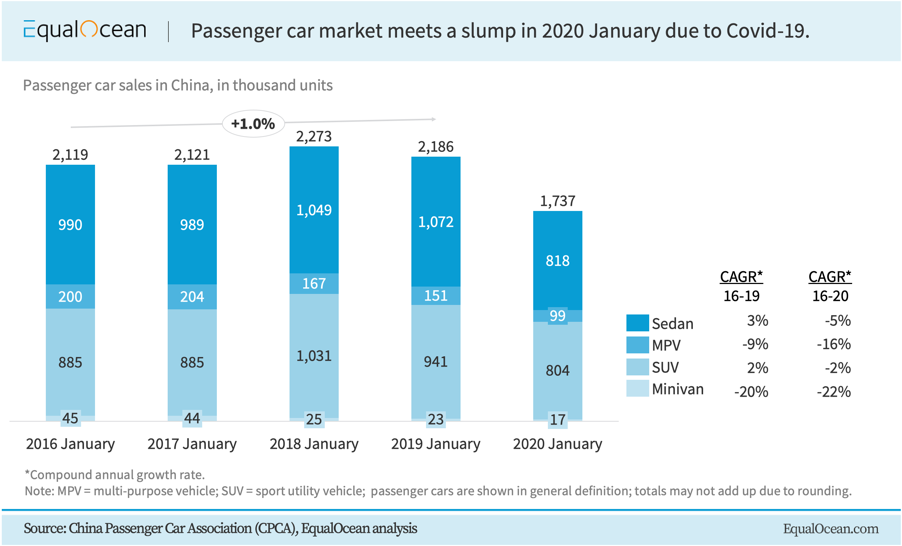 This agile reorientation not only saves car factories from severe financial stress but also spurs their commitment and social contributions towards the anti-virus war. Wuling decided to rebuild the auto assembly line into 14 mask production lines, including four N95-type lines and others for general medical uses, expecting a 1.7 million daily output. BYD (1211: HK), the new energy electronic vehicle company, planned to produce 5 million daily and 50 thousand bottles of disinfectant by the end of February.

Claiming the move is not for economic return, these new transformed providers are de facto implementing a win-win strategy. When BYD announced this cross-industry plan on February 8, the market responded positively, applauding its share price up to HKD 59.04 by 9.64% within a day.

Are masks produced by car-makers effective?

By function there are four types: the gauze mask, surgical mask, daily protection mask and industrial dust mask. In the context of coronavirus, surgical and N95 ones are the two types that can help prevent infection. Considering the medical standard and hygienic production environment, many people cannot help but wonder about the efficacy of this kind of protection from non-medical factories. 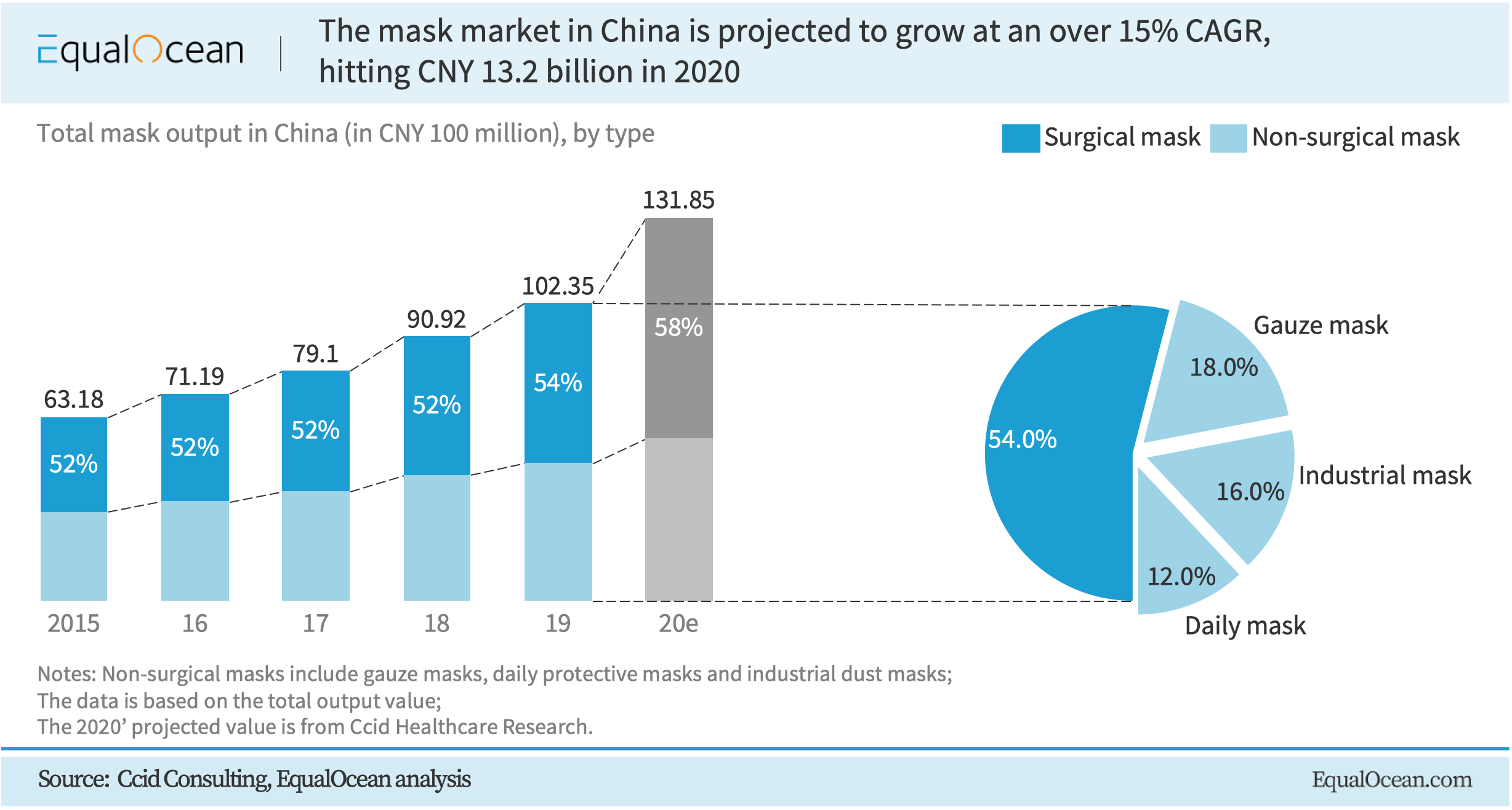 Indeed, it is not a popular idea that car-producers make masks, but it is not unprecedented either. For example, the German brand Volkswagen has run its sausage business for nearly five decades. So, auto production is a business of strong adaption capability, with flexible potential to expand the business.

The surgical or N95 mask is mainly made of polypropylene, a high-specification material with melt mass-flow rate (MFR) at 33-41 g/min, which is the same material applied to the soundproof cotton in car manufacturing. Plus, the car-coating workshop can provide dust-free production space with constant humidity and temperature, exactly satisfying the production standards for simple medical supplies.

With these pre-set technical advantages, no wonder many car manufacturers are actively engaging in mask production, publicizing the brand and injecting productivity into the slumping market. The only issue is how much the public accepts this concept and how long the companies will stay committed before getting back to their usual business.

Why are other players joining the mask business?

Following the wind raised by the car manufacturing industry, big names from other industries started to jump on the bandwagon. Sinopec (0386: HK), one of the Big Oils, cooperated with medical partners to produce masks and more names are expanding the list. Companies such as Foxconn (electronics contract manufacturing company), Daddy Baby (diaper company) and Gree Electric (000651: SZ) have joined. 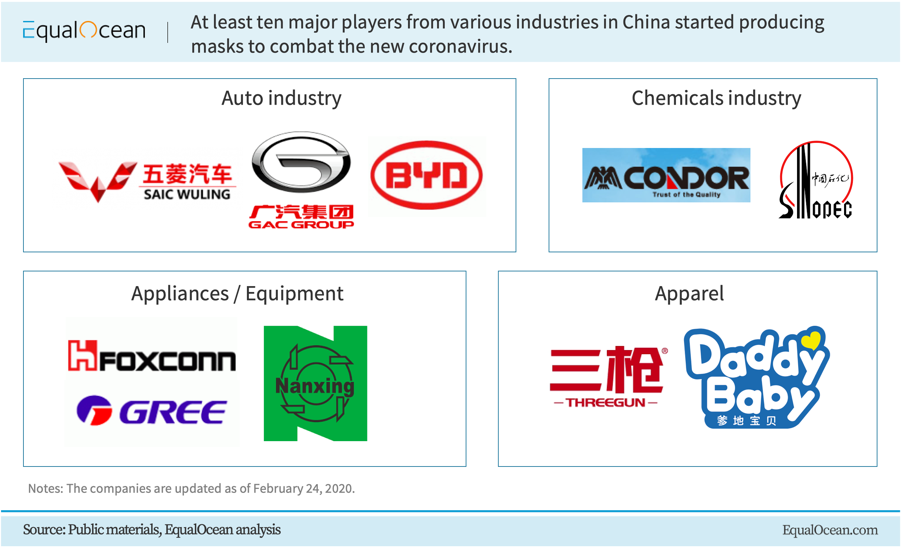 But why are these companies reorienting their businesses? One drive is the push from the sluggish market; the other is the pull from the considerable demand. Take the car industry as an example.

A push out of options

Hubei Province, the most suffered area amid the Covid-19, is also the most crucial supply base of auto parts. It houses some exclusive auto-part providers, playing an irreplaceable role in the industry of Original Equipment Manufacturer (OEM). The long-term suspension of work is inevitably volatile to the global auto-parts supply chain, as pointed in a previous analysis.

Even the auto giants face the risk of sizable economic losses. Mercedes Benz (Beijing), applied on February 6 to resume work, stating it would lose CNY 400 million every day if it uses up its one-day secure stock. BCG report expects a domestic capacity loss of eight days.

A pull for long-term hope

Meanwhile, the market sees a surging demand for masks for general use and medical use. Some target cities, like Wuhan, announced on January 23 that according to the “Infectious Disease Prevention Act” citizens must wear a mask in public or face criminal liability in extreme cases.

Hua Chuang Securities provided a cursory look into the current situation of medical supplies. Based on China’s Fourth National Economic Census (2019), there is a total population of 533 million working people, including 200 million in the secondary industry and 330 million in the third. If all companies resume work at full capacity nationwide, at least 530 million pieces would be needed, presuming every employee consumes one per day.

How many masks do we need?

The reality is that the supply is still far below the need. As of February 22, China’s domestic capacity can provide 54.8 million masks every day, almost three times of February 1, accumulating 570 million within 20 days. But it is still far from estimated 530 million on daily average if counting on the 5.6 million imported for weekly use. Not to mention that workers in the critical areas such as manufacturing, medical and transportation are required to change more frequently (every four hours).

The fast-spreading virus has heightened concerns in other neighboring countries. As of February 24, Korea has an accumulated record of 833 identified cases, including 231 newly added and Japan totaled 838 cases. The increasingly heated anxiety is affecting the market price of masks, with a typical surgical one sold at nine-fold of its original price in South Korea, or 6000 surgical ones prices at USD 456. Moreover, the housing industry, travel business and logistics, as the key economic drivers, are all struggling while anxiously waiting for the turning point.

The outbreak of Covid-19 has put the nation’s economy and public health in danger, while raising awareness of public health. Mask, a basic medical protection resource, has proven to be an asset.

CONTACT US
Scan QR code to contact us for professional consulting services
Next article
During and after Coronavirus: China's Collaboration and Housing