Our take on the 'Mobile King of Africa' – the company behind TECNO, itel, Infinix and some other consumer electronics brands dominating in the region. 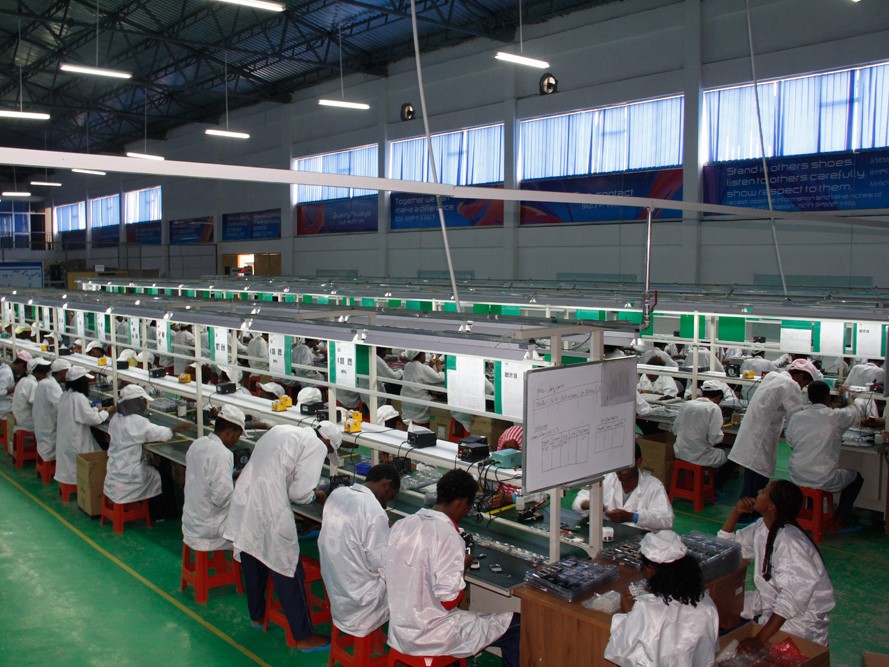 Last year, global smartphone market shipments took a nearly 5% dip. That was for the first time since the Simon Personal Communicator – the grandparent of all the modern intelligent handsets – was introduced by IBM in 1994. At the same time, 2018 was a terrible year for the top dogs in the industry: Samsung's sell-in shipments dropped by 7.2%, while Apple saw 1.72% of its 2017 volume vaporize. The two companies are losing much of their clout to hungry Chinese 'carnivores' like Xiaomi (1810:HK) and OPPO. Huawei, which is now experiencing some trouble amid international trade and tech tussles, increased its output significantly last year, getting closer to the silver. However, this is far from being the key insight here. The more important thing is that non-top-five mobile device manufacturers' share dwindled by 7.5%.

Monopolization of the sector is clearly revealing its oversaturation. Small enterprises can quickly swerve, adjusting the product mix in a flexible manner. Meanwhile, huge corporations are less resilient: they often can't just cancel multi-billion contracts signed with suppliers, foundries, retailers and other downstream and upstream partners with tremendous market power. As a result, major international corporations find themselves trapped, fully exposed to the declining demand for this type of consumer electronics. In some sense, they have become victims of their own success.

Nevertheless, even in this diverse group of runners-up, we see aggressive, rapidly growing disruptors. It is also a pearl of received wisdom that tomorrow's winners often go up when the whole industry is on the downswing. Those are always different from crowds of one-day companies and fading stars. Different in many respects – from market strategy to cost structure and supply chain management. Here's the epitome of such a firm.

Let's talk about Transsion – once again

Shenzhen-based mobile phone developer Transsion Holdings (传音控股, 688036:SH) is successfully combining the low-margin business with a smart glocalization strategy. Unlike the rest of the electronics giants, it is utterly selective in its global expansion directions. The firm's major brands – itel, TECNO and Infinix – are barely known even in its own country, not to mention advanced economies. Instead, the company's current target consumers are mostly living on the African continent and in the second-most populous state that is India.

The abovementioned brand arsenal has impressively dented the world's largest continent. To show some real results, the three accounted for 64% of the region's feature phone market and over 36% of the smartphone market in the third quarter of 2019, when measured by the number of shipments, according to IDC's latest data. An undisputed champion in the press-button segment, Transsion has also been at the apex of the smartphone pyramid since it pushed Samsung off the throne in 2017. 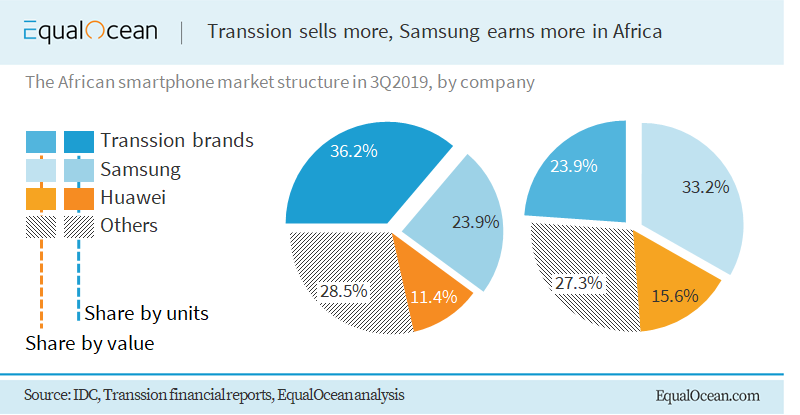 In the meantime, the Korean conglomerate delivered approximately 24% of all the big-screen smart handsets between July and September this year, followed by Huawei (11.4%). With 33.2% of the regional 'revenue pool,' Samsung also topped the list in terms of money collected from all the orders carried out in Africa within that period, beating the Shenzhen company (23.9%). The question of whether quality can spur quantity (and vice versa) is to be answered by each of the 54 economies.

It is hard not to note the fact that these countries, together with India account for over 2.5 billion pairs of hands and eyes; the lion's share of these people are relatively new to the mass technology. In other words, many of them are yet to have their first cellphone. And the likes of Transsion are, indeed, eager to help. As for the South China electronics maker, it is doing this in masterly fashion: the vast majority of its mobile phone models are tailored specifically for the local needs in a certain market. Of course, the prices are terribly attractive.

By saying "tailored," we mean actions that might be even considered absurd in some societies. Practical and, as always, short-term oriented, Chinese entrepreneurs try their best to squeeze profits through almost every possible means. They market devices with oil-resistant fingerprint recognition in India, where people traditionally eat with their hands; another example is cameras and software modified for individuals with darker skin tones.

Besides, in Africa, Transsion is famous for four-SIM-card phones. This novelty was also dictated by the demand side: a low real disposable income and relatively expensive mobile services make customers want to switch often between various operators to cut their costs.

There are many more marketing tricks of a similar nature. In other words, 'Think globally, act locally' – the company's vision – is fully mirrored in its strategy.

As the smartphone market is thick with devices of various kinds and price segments, the oversaturation – which we have just mentioned – is clear. Lately, many consumer electronics corporations have launched their household IoT (Internet of Things) projects. In order to build inclusive, interconnected ecosystems, they have been spending money and human resources in multiple fields, from microelectronic devices to software.

The powerful entities are also betting big on wearables – look at Apple, for example: watches, headsets and smart speakers accounted for over 10% of the American behemoth's revenue for the first time in the third quarter of this year. The vast majority of its global counterparts are following the trend, breeding new brands left and right. Transsion has also jumped into the game with freshly designed smart accessories – 'oraimo' and home appliances – 'Siynix.'

To support its countless consumers, the number of whom is growing exponentially, the company has also launched Carclare, an after-sales service chain that, at the moment, has more than 2000 centers in over 50 countries in Africa, Asia Pacific and the Middle East. Another thing – an attempt to monopolize the emerging economies' mobile space – is the self-developed Operating Systems (OS): HiOS, itelOS and XOS for TECNO, itel and Infinix phones respectively. However, the firm is not earning much from these new channels. The part of revenue obtained from the non-phone production has been hovering around the 3% level since 2016. It is, for sure, getting bigger, but the trajectory of this growth is far from being exponential. What's more, this change in the income structure tells us that Transsion's product mix has been continually taking a less diversified shape over the past three years: smartphones are firmly holding the garland, with a 70% share.

The reason is apparent – a consumption upgrade. Lowering the cost of production and increasing real disposable income in the developing countries bolster the market space for handy devices. A transition from cell- to smart- that took two decades in most of the advanced economies, is achieved at a faster pace by the burgeoning economies of the second and third echelons. The latter are now stepping into the second phase, facing ballooning household incomes – which is indicated by the Shenzhen phone maker's financial results.

For a company that wishes to expand its scope in such a technology-driven industry, research and development is a crucial issue. The Chinese manufacturer, according to its audited business records, has not been allocating much capital in this essential direction. The R&D-spending-to-operating-income ratio hit 3.31%, 2.99% and 3.14% in 2016, 2017 and 2018 respectively. At the same time, the number of people driving internal innovation therein reached 1,517, or 10.6% of the total, last year. So, low wages and inequality or plenty of new hires? Something else. On the one hand, it is filled with managers, who account for roughly 16% of the corporation's headcount. A bulky sales department – another factor here: it is almost as big as the core value-added part of the money-making mechanism – is full of operating personnel. By comparison, most of the Star Market-listed companies of similar size have less than 10% of sales employees.

Nonetheless, an aggressive hiring campaign that has been undertaken in parallel with the worldwide takeover in recent years is another major contributor: the amount of Transsioners grew from 9,926 in 2016 to 14,317 last year.

Despite all the hype around Transsion and the phone maker's stellar performance in Africa, there are some cautionary notes to sound. While the impending robust competition from omnipresent multinational corporations with a diverse product mix, such as Xiaomi (1810:HK), threatens the firm's immense niche, another risk factor comes from a possible consumption upgrade in the target markets. It is pretty safe to say that Transsion has no advantage in higher-priced segments, where the concept of the 'global brand' plays a crucial role.

Entering new consumer electronics submarkets such as household appliances (powered by the Internet of Things) and wearables will be vital for Transsion in the future. It is a quite complicated question as to whether the company will be able to gradually improve and diversify its product line, following economic development trends on the continent. The stiff rivalry is what awaits it outside the 'comfort zone' – a low-margin smartphone business. Therefore, betting on the consumer electronics manufacturer doesn't necessarily equal betting on Africa's future.