At least, there are serveral stories for DiDi to tell its existing investors, which waited years to cash out after its IPO: autonomous driving & international expansions.

DiDi Chuxing, the largest ride-hailing platform in China, released its first issue on safety & transparency last Tuesday. DiDi has received approximately 800,000 accumulated reports of dispute claims between drivers and riders that involved with its platform in the first quarter of 2019, representing 0.0042% of total orders. After investigation, more than 35% of those allegations were untrue. 10 were reported to be criminal crimes and 111 became public order cases. DiDi has a 100% clearance of all those crimes thanks to its close cooperation with law enforcement agencies.

DiDi spared no efforts in safety since a female passenger was murdered by her driver when using DiDi Hitch service last September, a social ride-sharing based on same-route algorithms. The platform laid off its head of calling center and Hitch Department, suspended Hitch indefinitely; it assigned Hou Jinglei (侯景雷) as new CSO (Chief Safety Officer, a successor of Wang Xin) in March and Pang Jimin (Jimmy Pang, 庞基敏) as SVP of Government Affair and Ride-hailing Safety, who reports to the founder and CEO Cheng Wei (Will Cheng, 程维) directly; in terms of product design, the firm added safety center featuring guidelines and help, and updated SOS button within the passenger app to lead reports to police directly rather than calling center.

The firm now initiated 19 safety regulations and expanded its security operation team to 2,548 members, DiDi claimed in a press release on July 2. However, DiDi still feels insecure. It hesitates to relaunch Hitch service back to its platform even public is asking for it constantly. Rumor has it that DiDi Hitch would be back to life in June when DiDi was reportedly testing a service that shares similar functions with Hitch in May.

DiDi did not have to pour money to subsidize Hitch drivers for their core needs are not making money from the rides. As a result, Hitch was one of the two departments (the other is Designated Driving) that recorded positive net profits in 2017, with a CNY 800 million net profit. Hitch’s take rate was approximately 5% -8%, far less than Express’s 20%-25%. Hitch recorded 2 million daily rides before it was suspended, accounting for 10% of the firm’s total daily rides.

Nevertheless, the ride-sharing market waits for no one. DiDi can only miss the old days when Hitch existed. After DiDi’s doom, several players caught up: Hello Chuxing, starting its business as a bike-sharing platform, made foray into ride-sharing last December and registered millions of drivers in 20 days after launch; Dida Chuxing, an incumbent in ride-sharing, also explored into taxi business, trying to eat up DiDi’s market share. Dida even cooperated with enterprise communication and collaboration platform Ding Talk developed by Alibaba, to roll out a workplace ride-sharing service that allows employees to share cars during business travel and business visits. Thanks to Dingtalk’s millions of data and enterprises management solutions, Dida cut 50% of costs during the process compared with express and premier car-hailing, according to several sources online. Dida did not comment on the issue.

Suffering from outside competition, DiDi faces an awkward situation. According to people familiar with the issue, DiDi was mulling over whether it was suitable to speak all the data about disputes claims, criminal crime, and public order case mentioned before out loud in the last minute before DiDI really pressed the button.

From that, DiDi was exposed to the light with another formidable truth meanwhile: DiDi posted 1.9 billion rides and 21 million trips per day in the first half of 2019, as suggested by the dispute claim number and its proportion as of total orders. 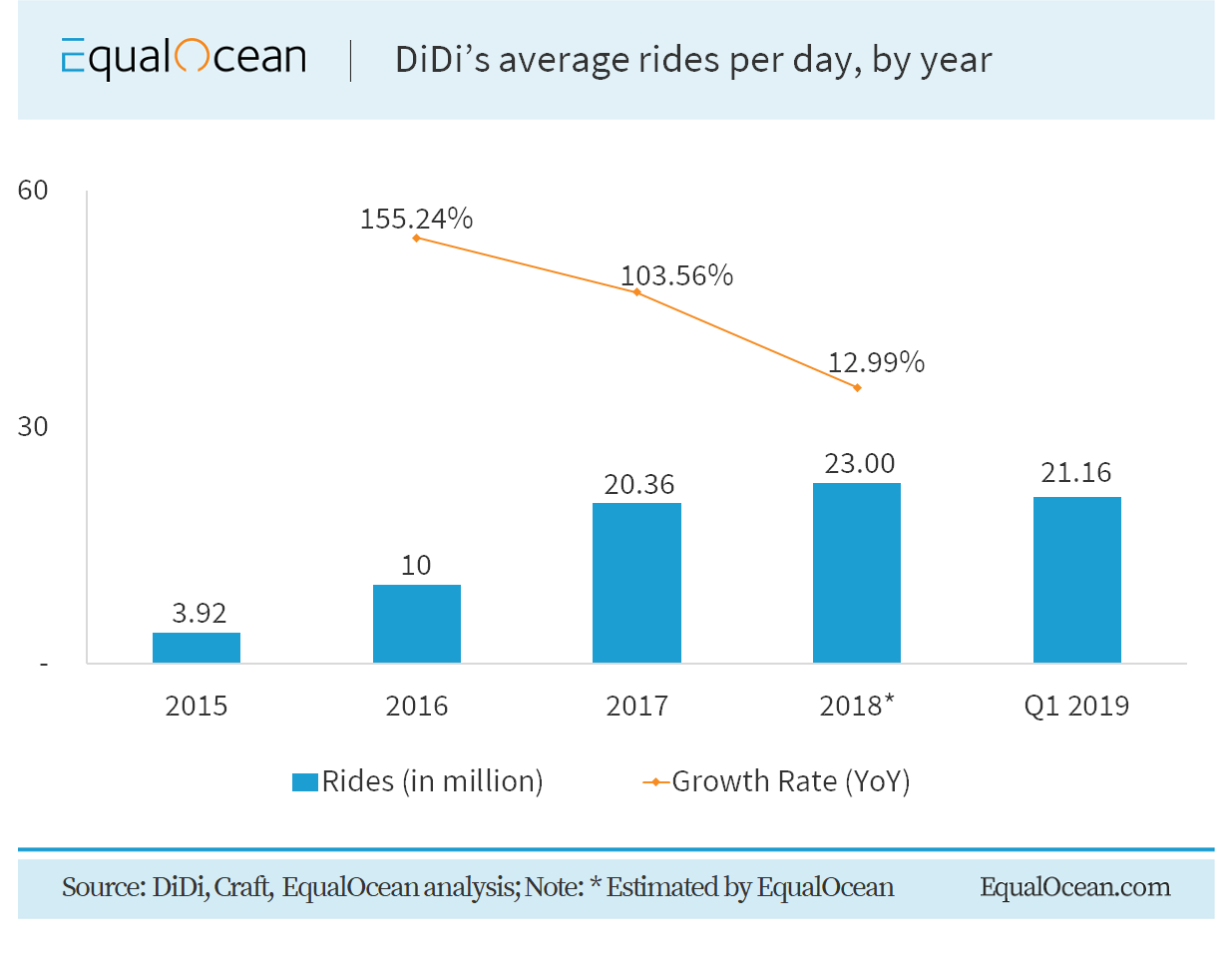 DiDi mentioned its average daily rides several times. The latest one was about a peak number of 25 million by DiDi’s president Liu Qing (Jean Liu, 柳青) in 2017. 21 million daily average rides, is not a good sign for the ride-hailing giant. It reflects that the company’s losing momentum in growing rides, which will inevitably impact on the firm’s gross bookings, gross revenues, and bottom line.

By cutting off 2000 employees (15% of total), the firm decided to focus on its main business, as expressed by Cheng in this Feb’s DiDi monthly meeting. Starting from here, DiDi quit its attempts to break into hospitality & tourism industry. Peru, and Chile, two major locations where the company expands its business directly this year, represent DiDi’s new hope. However, hearing and learning from local consumers can be hard for a foreign company, as Uber was kicked out of the China market by its local competitor DiDi.

At least, there is another story for DiDi to tell its existing investors, which waited years to cash out after its IPO: autonomous driving. DiDi is seeking investment from its largest shareholder Softbank and other potential investors for its autonomous driving business unit’s fundraising, tech media the Information reported on July 1, amid an emerging trend of ride-hailing companies to price the operations. Uber received USD 1 billion of investment by a consortium including Toyota and Saudi Arabia’s sovereign wealth fund, which valued the unit at USD 7.3 billion.