The Unicorn SenseTime to Incubate the Next Gen of AI Startups

SenseTime, the largest AI tech unicorn in China, has been investing AI startups frequently since 2018. The unicorn is feeding the next-gen unicorns. 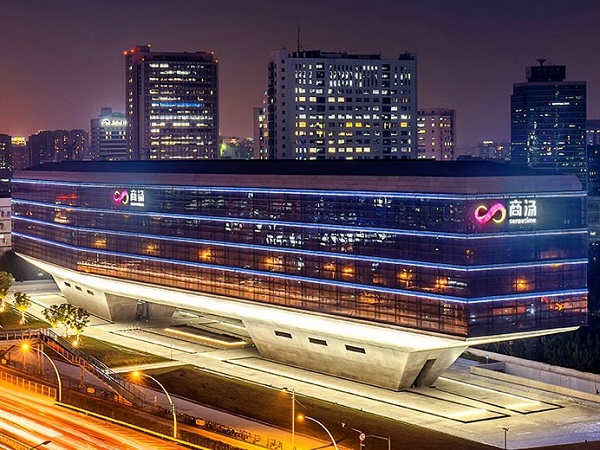 SenseTime, the idol artificial-intelligence (AI) tech unicorn in the world, grows from an AI enabler into an integrated AI institute in the industry. SenseTime is no longer simply a company with cutting-edge deep learning (DL) and AI technologies as presumed at its birth. Stepping into the fifth year, SenseTime scaled up to a company with a size of over 3,000 employees. With different verticals and functional departments, SenseTime strives to maximize its enabler identity and realizes AI into real practice through varied means.

It is known that SenseTime raised rounds of funding and was valued USD 6 billion at the latest financing round. Being an investor, SenseTime is not as famous as its financial backers like SoftBank, Alibaba, Temasek, etc. Reported by Bloomberg, SenseTime set up a fund of USD 2 billion to invest AI-relate startups. It is considered practical and realistic being an investor. Shown on itjuzi.com, SenseTime has invested or acquired 11 companies dated now and most of these financing activities are strategic/early-stage investments. 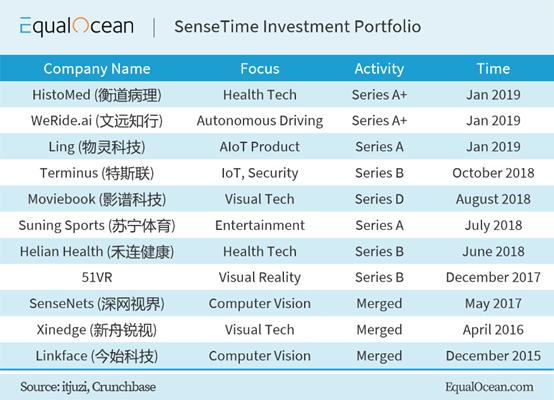 From SenseTime's investment trait, the direction of SenseTime’s development is revealed. Computer vision (CV) is the starting point of SenseTime and so its early investment cases. Linkface, Xinedge, and SenseNets were merged into SenseTime and they were highly CV-tech-related companies.

Though with strong soft capabilities, the development of image input hardware restricts the upper bound of algorithms and applications. Xinedge is a company with the ability to design and produce image input devices based on the need for computer vision. The image input devices are cameras that can optimize the quality of the captured images and return a better result for the image analysis process.

The two companies introduced above are CV tech companies, so did others that SenseTime invested or acquired before 2017 share the same characteristics - CV tech specialized. From monotone CV companies to a diversified portfolio, SenseTime has broadened its horizon and eyed on expanded potential portfolio range since 2017.

Suning Sports and Moviebook are the two seemed less related to SenseTime’s core business at the time. Suning, originally a physical electronics retail chain in China, has evolved into an integrated group. Suning and SenseTime’s cooperation is intense and mutually benefited since they are each other’s investor.

Along with the trend of intelligentization, Suning is a pioneer in the Smart Retail transformation wave, which cannot be separated from the tech assistance from SenseTime. Suning Sport was invested by SenseTime in July 2018, which was only three months after Suning invested in SenseTime’s series C financing along with Alibaba, Temasek, and Beyond Ventures.

Suning Sports’ main operation is sports game broadcasting. How SenseTime can be related to broadcasting cannot split the video visual technology, which is the strength of Moviebook.

Moviebook enables the commercial service by means of AI imaging analysis and embedding advertisement into videos through its visual technology. Zhiruyi (植入易), it means easy commercial insert) helps to insert either still or moving commercials into videos; Videoyi simplifies the video analysis process such us element tagging, identification, tracking, etc. Moviebook represents the future of AI+ entertainment function and Suning Sports is a representative that could be re-formatted entertainment subject. 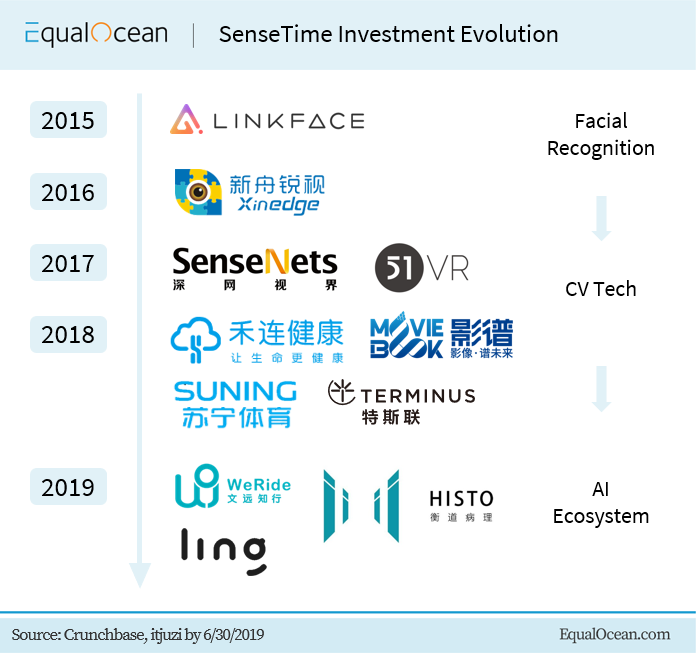 As late as in 2018, SenseTime’s portfolio map demonstrated possible AI+ industries at the time. From CV to healthcare, the AI giant has been trying to explore as many applicable scenarios as possible.

Terminus was previously a smart lock designer and producer and it has upgraded to an inclusive security service provider using its smart building technologies. Dated now, Terminus is a unicorn-sized company valued at USD 1.1 billion from its latest financing closed in 2018. Building an IoT-enhanced security ecosystem and AI technology to facilitate the soft part of the ecosystem is the strength of Terminus.

The unicorn, SenseTime, investing in smaller unicorn like Terminus indicates a mindset transition. At an emerging market, top players will strive to dominate the market and optimize their impacts. For smaller players in the fast-growing market (i.e. AI-related markets), they are less seen but still with strong expertise in some certain areas that can support them staying in the game.

The top four AI tech companies in China, SenseTime, Yitu, CloudWalk, and Megvii, are expanding speedily. Yet from competing with peers, they focus on selves’ development and actively explore the boundaries of the applicable scenarios. For instance, SenseTime is well-known for is security ecosystem and Yitu is famed for its healthcare products, but their AI solutions have covered from smart city to smart manufacturing.

As we can tell from SenseTime’s investment trait, the border of its investment is expanding along with the growing business. Based on the observation of SenseTime’s investment activities, most cases are the applicable side of AI technology. Truly, the commercialization and sustainable business development are the two most-cared topics for AI unicorns and interest involvers.

It is evident to conclude that SenseTime’s investment activity is at phase I or at least the application phase since it focuses on AI tech application scenarios and these-and-such applications are critical to its short-term sustainability and the completeness of business model. For the next investment phase, the strategy might evolve to a higher level, such as investing in computation hardware and others that can provide a firmer foundation and wider playground for SenseTime to grow and upgrade.

SenseTime breeds the next generation of AI startups via strategic investments and is building an inclusive AI eco-system through partnerships with these newborns and baby unicorns. Similarly, another top player, Megvii (previously Face++), invested several startups such as Video++ (极链科技), WhaleHouse (鲸仓科技), XianLife (鲜生活), etc. in last year. AI tech unicorns investing in startups that are closely related to AI tech applications is common in China. Investing in these startups is also a way to invest themselves.