We analyzed how Merit Interactives leverages AI to help mobile apps increase their user retention rates and how the company's business model differs from its competitor's. 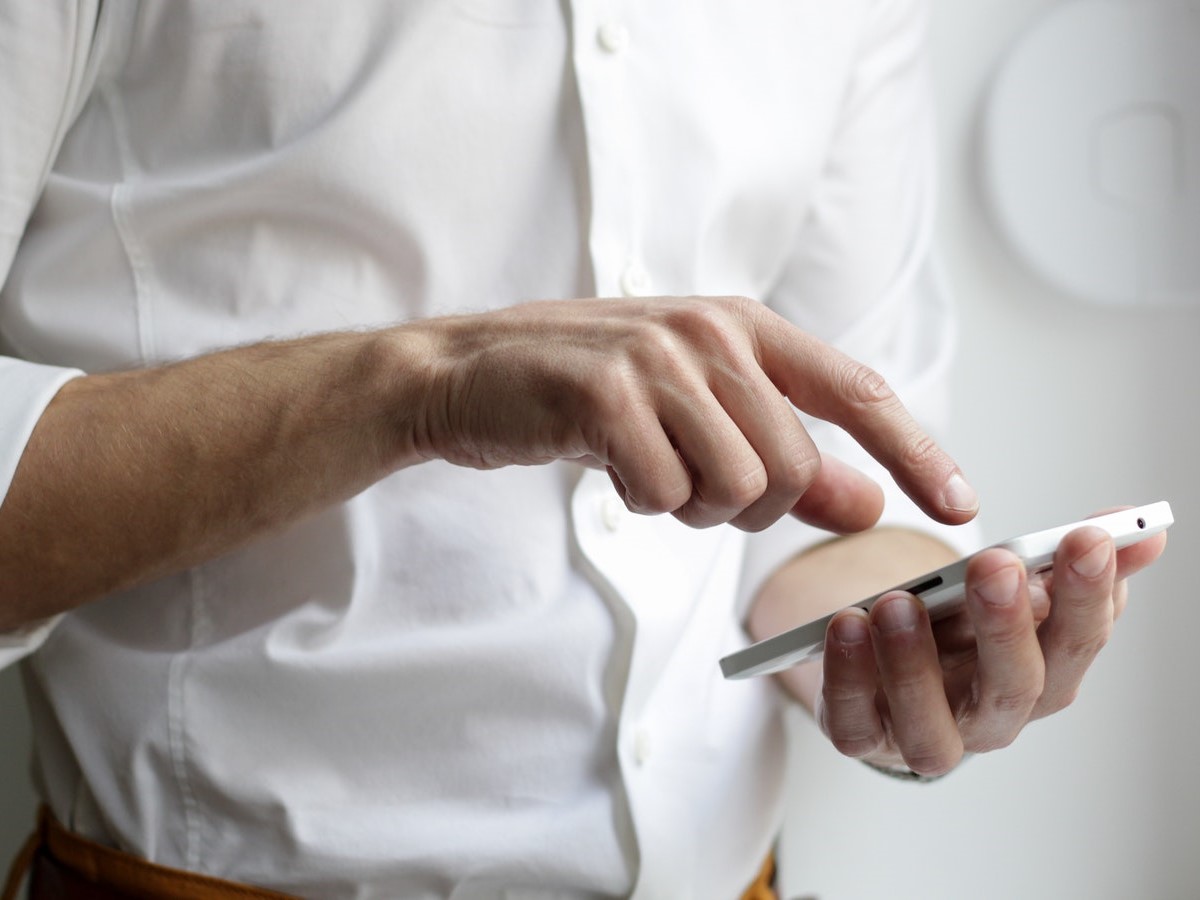 There is a company supporting over 100,000 apps including JD.com, Weibo.com, CCTV, Meitu, and DiDi; that is the push technology service provider founded in 2010, Merit Interactive (每日互动). On the back of rising app churn rates and users’ unwillingness to receive irrelevant mobile notifications, smart notification provides a solution to attract users back to the app when they are on other apps or when their mobile phones are off. Such service providers deliver a variety of information, such as sales promotions (e.g. “Receive your 15% OFF coupon before the end of month!”), location-based messages (e.g. “Stop by our midtown store and enjoy the NEW collections!”), and new contents available on media apps (e.g. “Check out our latest talent show”).

In March 2019, Merit Interactive listed its shares on Shenzhen Securities and the company has a current market cap of ~CNY 25 billion (USD 3.5 billion). The stocks rose more than 44% during its first trading day, indicating strong investor enthusiasms. In its prospectus, revenues in FY18 was CNY 540 million with a 3-year CAGR of 75% and net incomes in the same year was CNY 250 million, representing a high net margin of 46%. The goal of this report is to analyze Merit Interactive’s three operating segments separately and to compare the company with Aurora Mobile. Comparison between Merit Interactive and Aurora Mobile, a direct competitor with shares traded in the U.S. stock market, is also included.

The company organizes its operations into three segments: developer services, marketer services, and other data solutions.

Data management product, “GeShu”: while a push notification only fulfills the basic needs, app owners are more interested in seeing what reactions their messages would trigger. GeShu analyzes meaningful app engagement metrics including how many notifications were opened, which platforms resulted in higher clicks, and how long users stayed on the apps, etc.

Marketer services: The company serves the marketing agencies and help them reach audiences accurately via both notification center ads and in-app ads.

Notification Center ads: end-users will receive similar messages on the notification bars; the difference is that Merit Interactive’s customers change from app owners to marketing agencies in this case.

In-app ads: The company purchases advertising spaces from online media platforms such as Weibo and Mango TV, and then helps marketing agencies place video ads and display ads on those platforms.

Other data solutions: the company offers the Data Management Platform (DMP) and consulting services to industry verticals including financial services, tourism, and public sector. For example, it provides financial institutions with anti-fraud and risk warning, as well as supports the government by sending natural disaster warnings and missing people alerts to the public.

According to Frost & Sullivan, push notification is the most popular app developer service in China, accounting for 37% of the app developer services used by the top 100,000 apps in 2017. The number of mobile apps using push notification services grew at a CAGR of 18% from approximately 378,000 in 2015 to approximately 526,400 in 2017, representing 24% of all mobile apps in China, and is projected to rise to 1.3 million in 2023. We believe the double-digit secular growth is justified by intensified competition among mobile apps and increasingly accurate user segmentation offered by notification service providers. The market is an oligopoly market and was dominated by three leaders which accounted for 96.8% in total in 2017: they were Aurora (54%), Merit Interactive (26%), and Union League (20%), according to Frost & Sullivan. 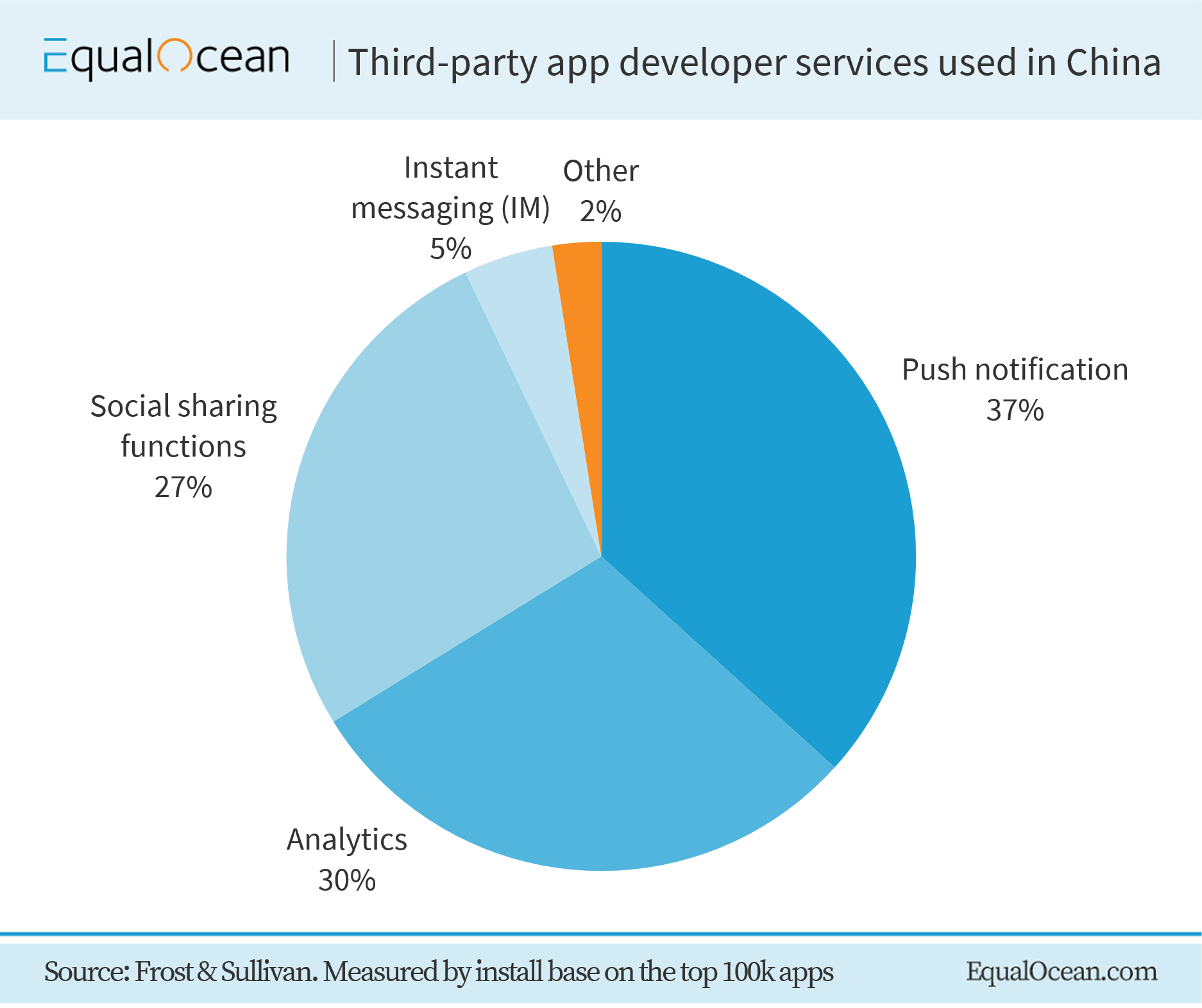 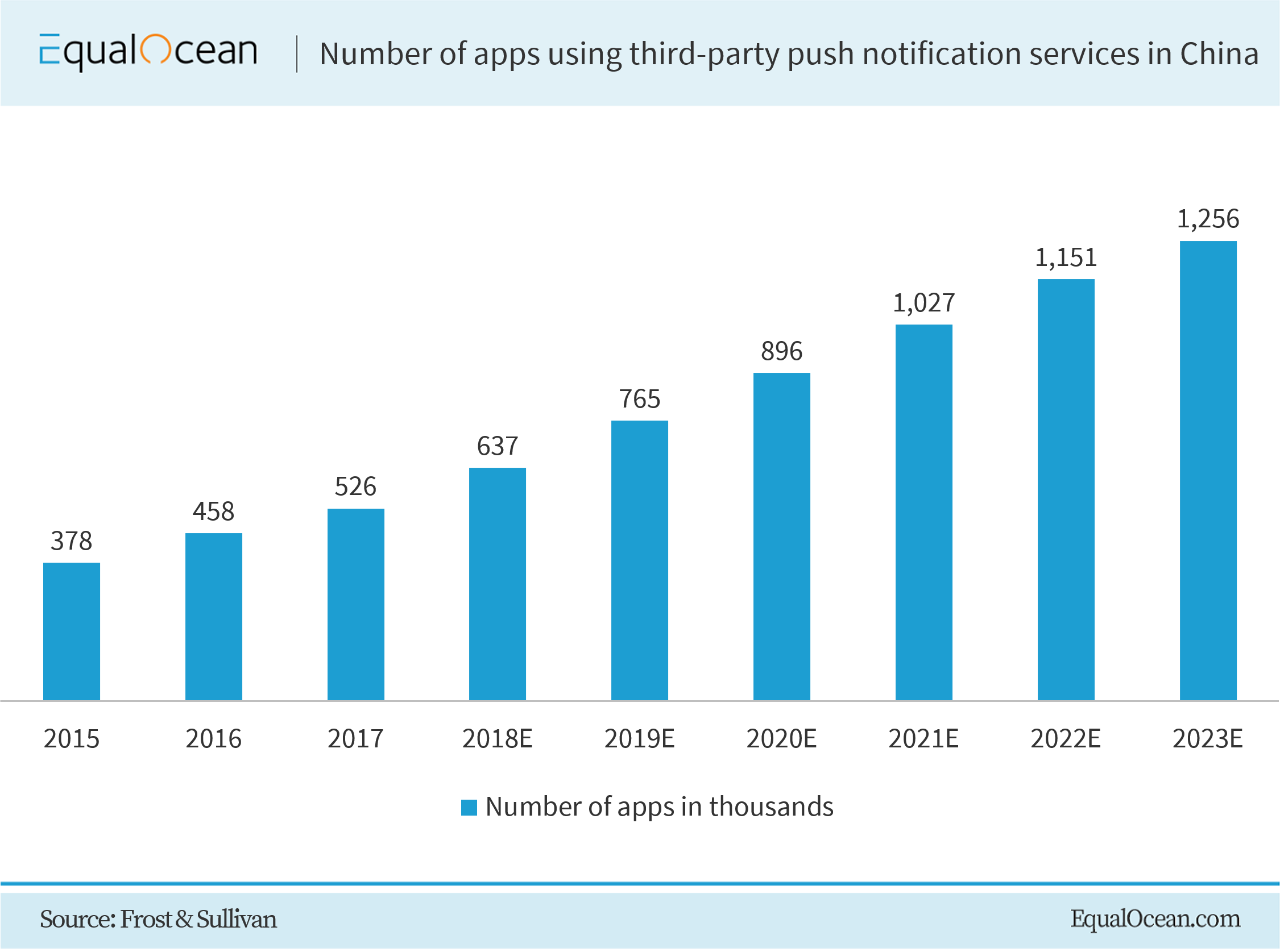 At Merit Interactives, developer services earned CNY 335 million in FY18, with a gross margin of 93%. The company has a freemium offering for developer services - apps with less than 5 million registered users can use the SDK for free; those who own more than 5 million users or wish to use the value-added services (customize audience segments and delivery speed, gain in-depth views of audience interests and 24/7 technical support, etc.) need to pay subscription fees. Since the company’s competitors are also providing similar freemium models at similar rates, app developers are likely to choose the best service providers for its superior data analytics capabilities.

Currently, the majority of app developers are still using the company’s notification services for free and Merit Interactive’s paid customers have been growing at a slower rate, with conversion rates of less than 2% in the last 3 years, according to the company. Paid users are mainly large-sized businesses; the top two customers are Baidu and Weibo, which own multiple mobile apps respectively. Transactions related to Baidu and Weibo and their related parties accounted for 31%, 35% and 24% of total revenue in FY16, FY17, and FY18. Comparatively, there is less concentration risk at Aurora Mobile as no single customer represented more than 10% revenues during the same period.

Given the high penetration rate and limited price/product differentiation among the three players, revenues from selling SDKs to app developers could be difficult to maintain the previous high growth rate going forward. We note that revenue growth has already decelerated from 255% in FY17 to 60% in FY18. However, we estimate the cost structure which mostly consists of bandwidth and server costs would stay constant and incremental cost per user would be minimal; Hence, the segment can maintain its 90%+ gross profit margins in the long run.

In this segment, Merit Interactive serves as a middleman: after receiving purchase orders from marketers, the company utilizes its big data analytics to add values (to determine which advertising channels will result in high conversion rates), and then purchases the ad spaces from media platforms such as Weibo, Ink Weather, and Mango TV.

Revenues in this segment have been declining by 2-3% YOY. In FY16, marketer services accounted for 63% of total revenue but the number dropped to only 20% in FY18, caused by the stronger momentum in developer service segment. Marketer services’ gross margin of 49% was much lower than that of developer services, as the company changed from a manufacturer role to an intermediary in these transactions. Gross margins have also been on a downward trend and decreased from 55% in FY16 to 49% FY18, likely because the company purchased ad inventories from more platforms at potentially higher rates. 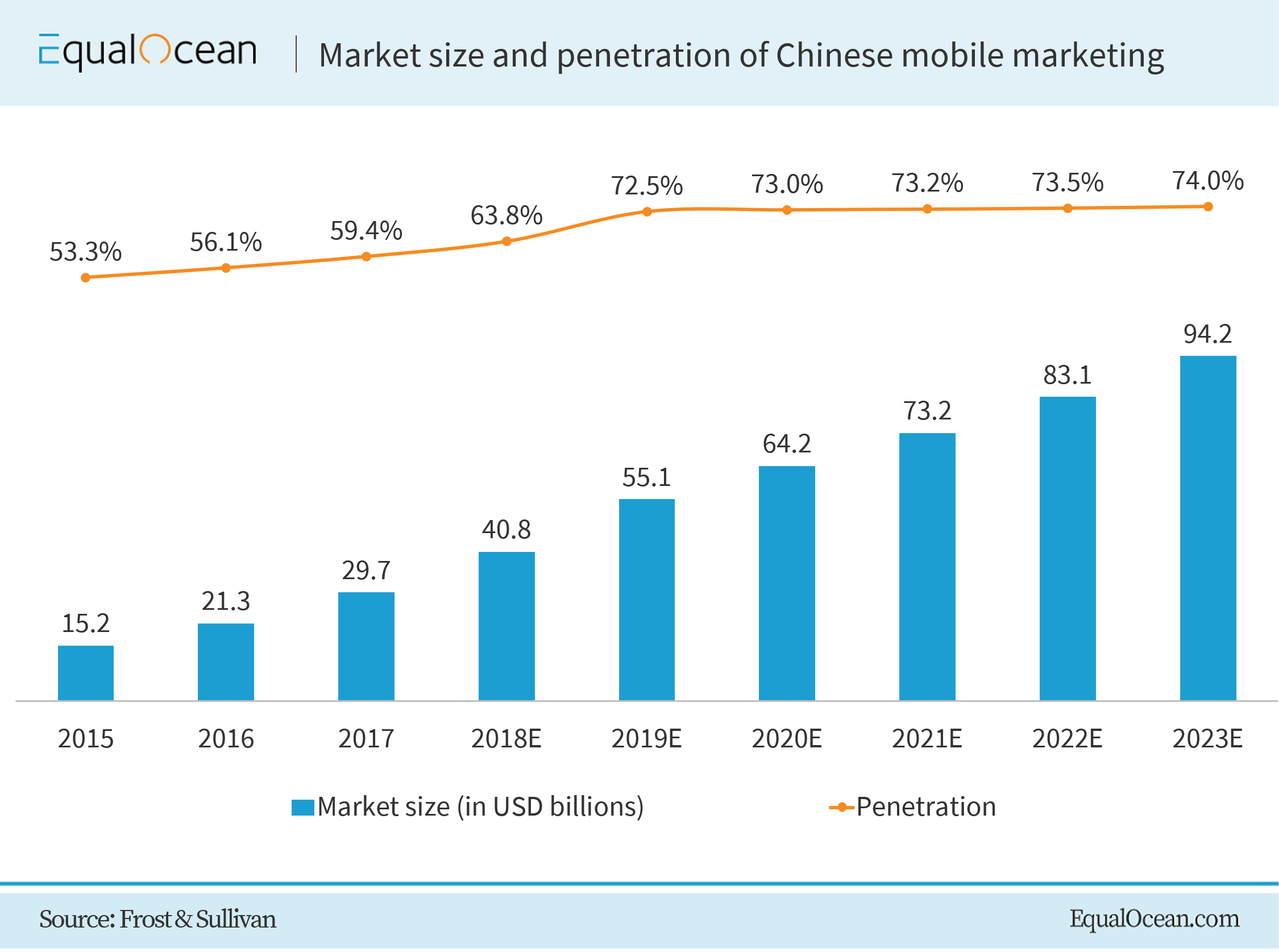 This segment is a new business and revenues grew from CNY 7 million to CNY 106 million, representing a 3-year CAGR of 289%. While it has merely sourced a small number of clients, it is the main growth area with lots of opportunities in specific verticals. For example, the offline retail, real estate and tourism sectors in China have shown growing demands for location-based intelligence services to improve their operating efficiency; financial risk management driven by data analytics has become an edge to both traditional banks and rising fintech startups. Since the analytical features in such services are still basic at this stage, it is crucial for the company to enrich its data pool and strengthen its AI capabilities to offer deeper insights.

Merit Interactive’s biggest competitor in China, Aurora Mobile, also went on public recently but chose NASDAQ, with a ticker of JG. The company recorded revenues of CNY 714 million (USD 104 million) in FY18, growing at 151% YOY. It has a market cap of USD 925 million, implying a 9x P/S ratio. Due to the low stock liquidity, Aurora Mobile has been trading at a discount compared to Merit Interactive.

Similar to Merit Interactive, Aurora offers developer services, marketer services, and other data solutions. In developer services, different types of SDKs are named JPush, JMessage, JAnalytics, JShare and so on. Even operating in the same sector, those two companies showcased largely different financial results. While Aurora earned higher revenues than Merit Interactive, its gross margin of 28% in FY18 has significantly lagged that of Merit Interactive and the company incurred USD 93 million net losses in FY18. This was primarily driven by the difference in revenue structures, since the majority of revenues at Aurora Mobile came from marketing services which incurred cost of revenues for purchasing ad inventory, while developer services do not incur such costs.

Two companies reported different metrics, so it is difficult to compare their performances directly. For example, Merit Interactive reported an average daily active device of 390 million while Aurora Mobile claimed an average monthly active device of 1.04 billion. However, we can conclude that the higher S&M expenses (CNY 84 million at Aurora vs. CNY 76 million at Merit Interactive in FY18) and much larger R&D investments (CNY 134 million vs. CNY 78 million in FY18) have led to Aurora Mobile’s faster top-line growth and more SDK available relative to Merit Interactive. 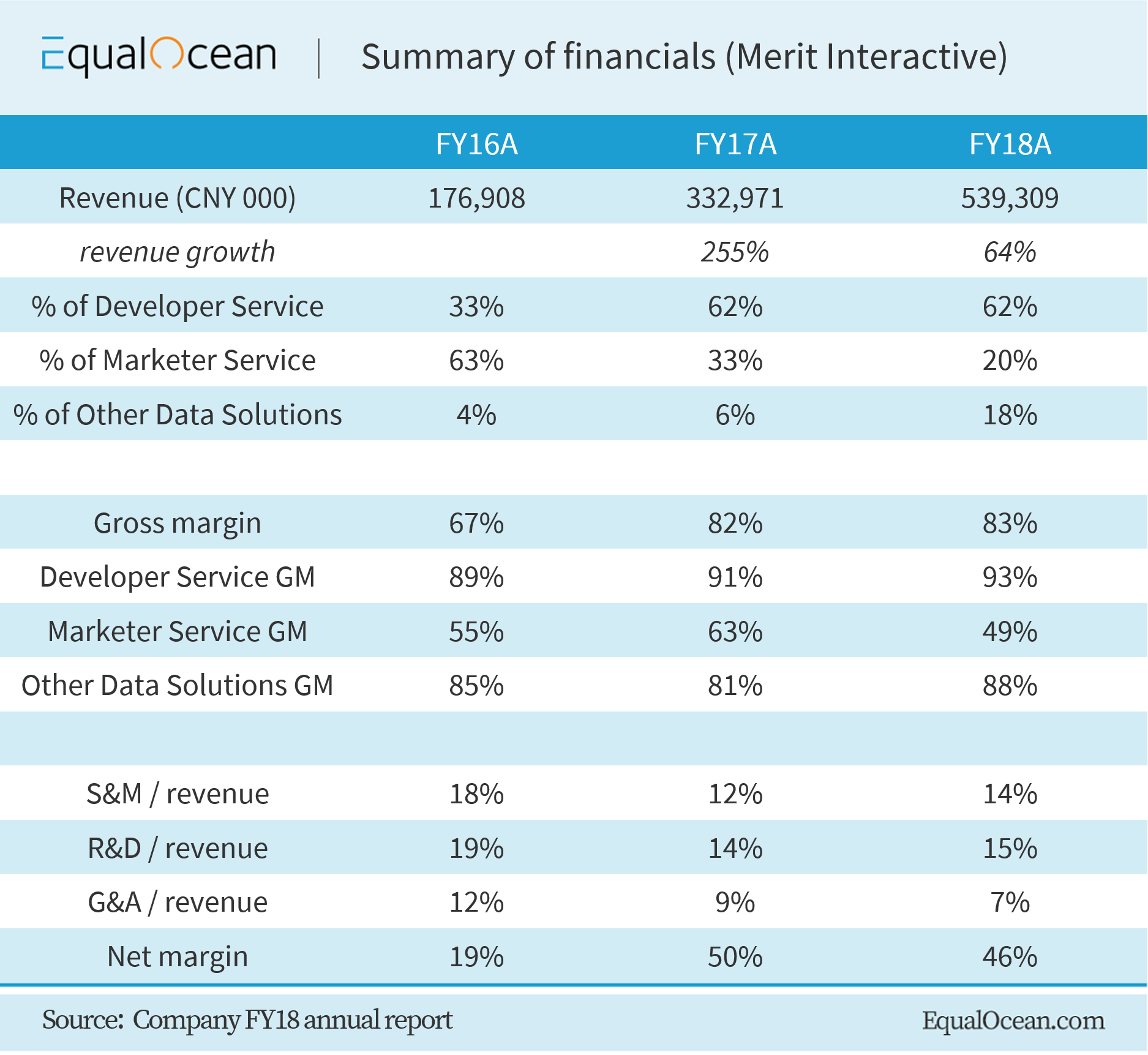 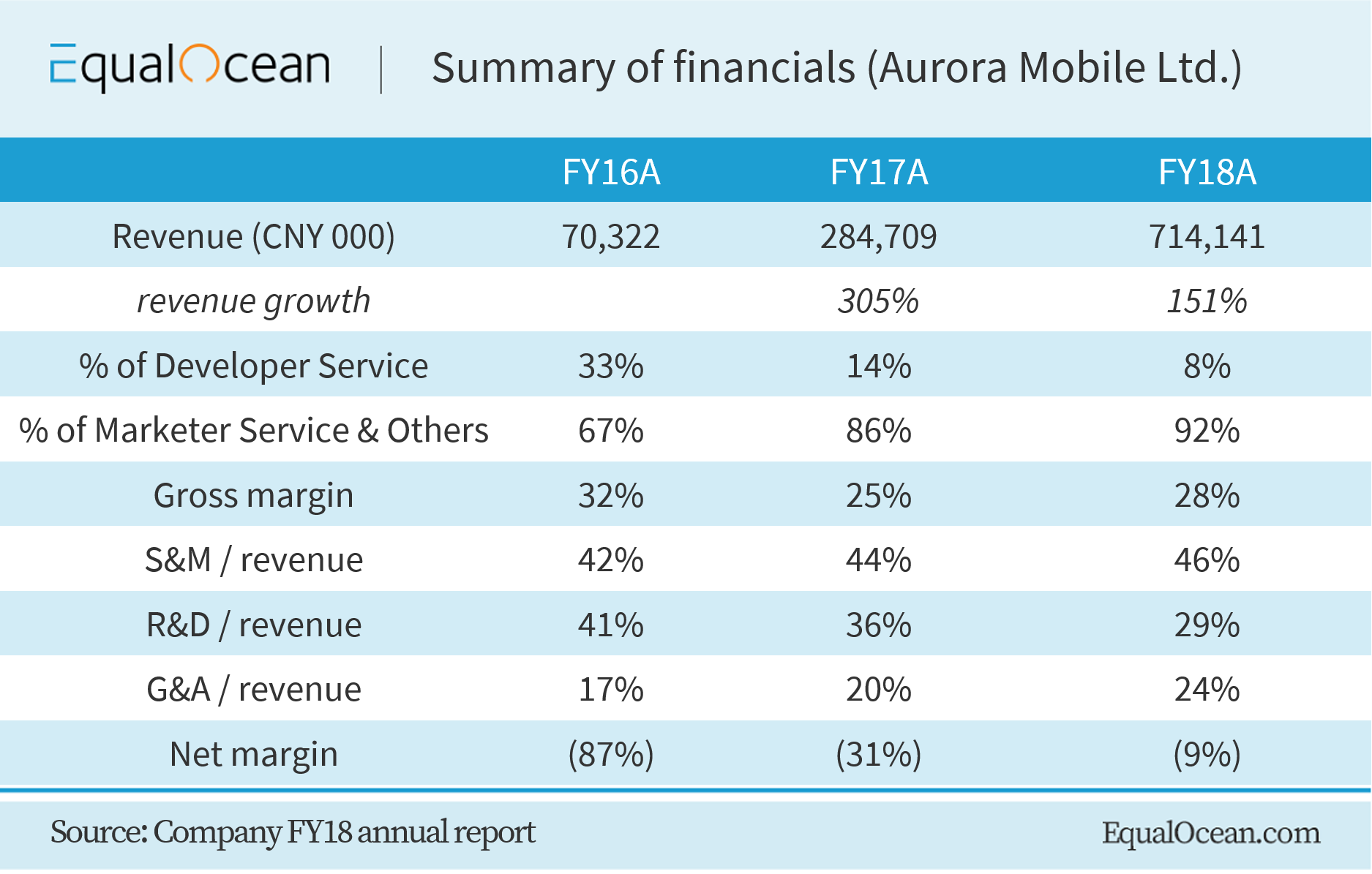