EqualOcean published the top 30 players of Chinese artificial intelligence chip industry, in terms of the valuation, technology achievements and the attention rate of capitals. 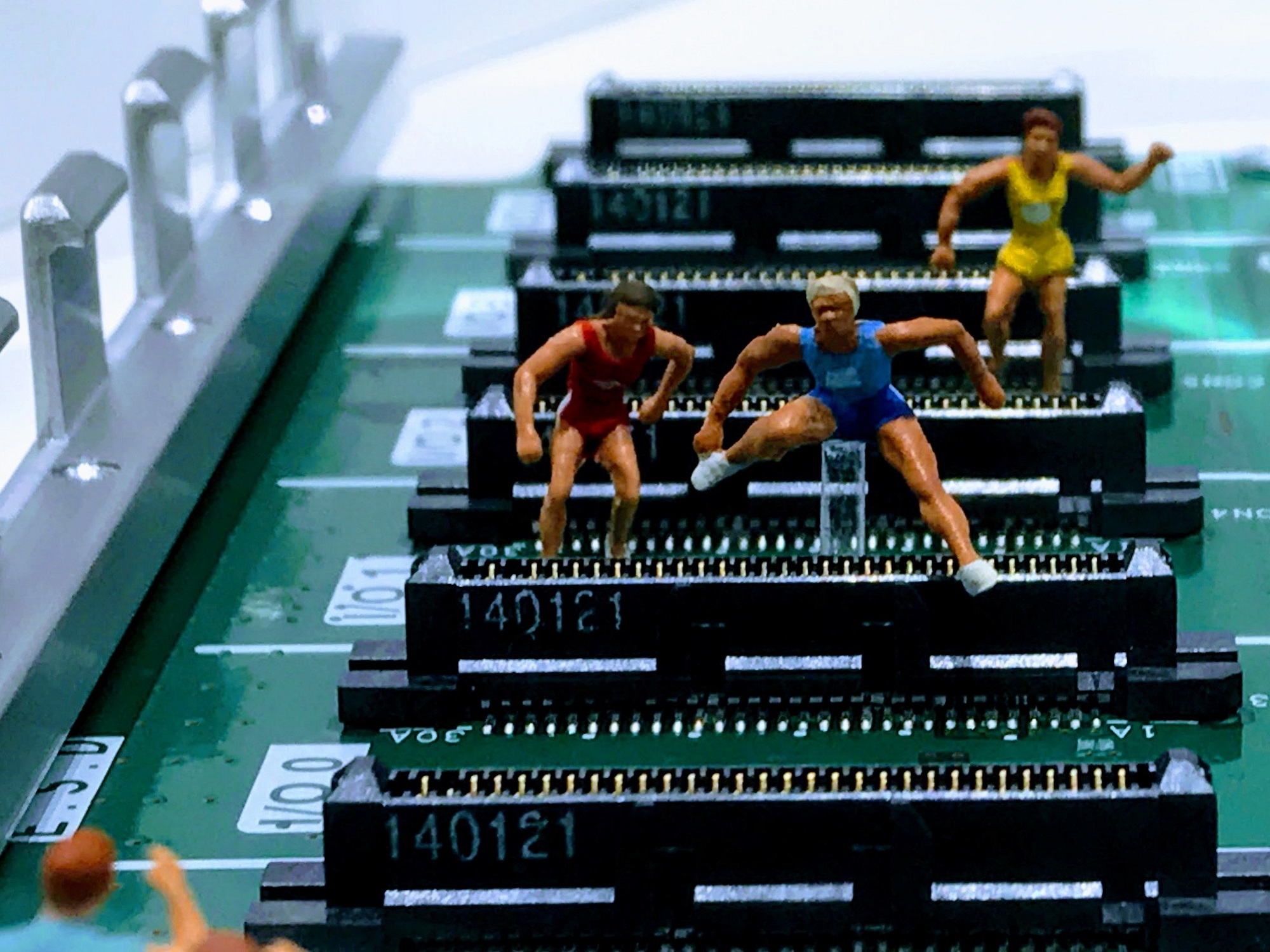 The acquisition and store of massive data and the show of computing ability of artificial intelligence has a close connection with the hardware – chips. In this way, the development and manufacturing of chips become one of the most important chains in the artificial intelligence industry and attracts more and more investors and capitals. In addition, it’s an industry with great potential. According to Morningstar, the international fund ranking institution which is highly authoritative, by 2021, the market size of the global artificial intelligence chips would be more than USD 20 billion.

The chips, as the essential hardware of artificial intelligence technology industry, has attracted great resources from the capital, government, and society. In the future, with the promotion actions and help from the capital market, Chinese AI chip manufacturers could have a better environment for research and development. Since the U.S. has a strong technology advantage in the development of CPU/GPU, the AI chips with ASIC or FPGA structure, and the neuromorphic chips may bring new opportunities for Chinese enterprise.

The List of Chinese AI Chips Manufacturers from EqualOcean

With research and study, EqualOcean gives the list of Chinese AI chips manufacturers. There are 30 enterprises selected by the list, which represents the leading technology level of the Ai chips manufacturing level of China. The enterprises in the list are in alphabetical order, and they all meet the selection standard of EqualOcean. 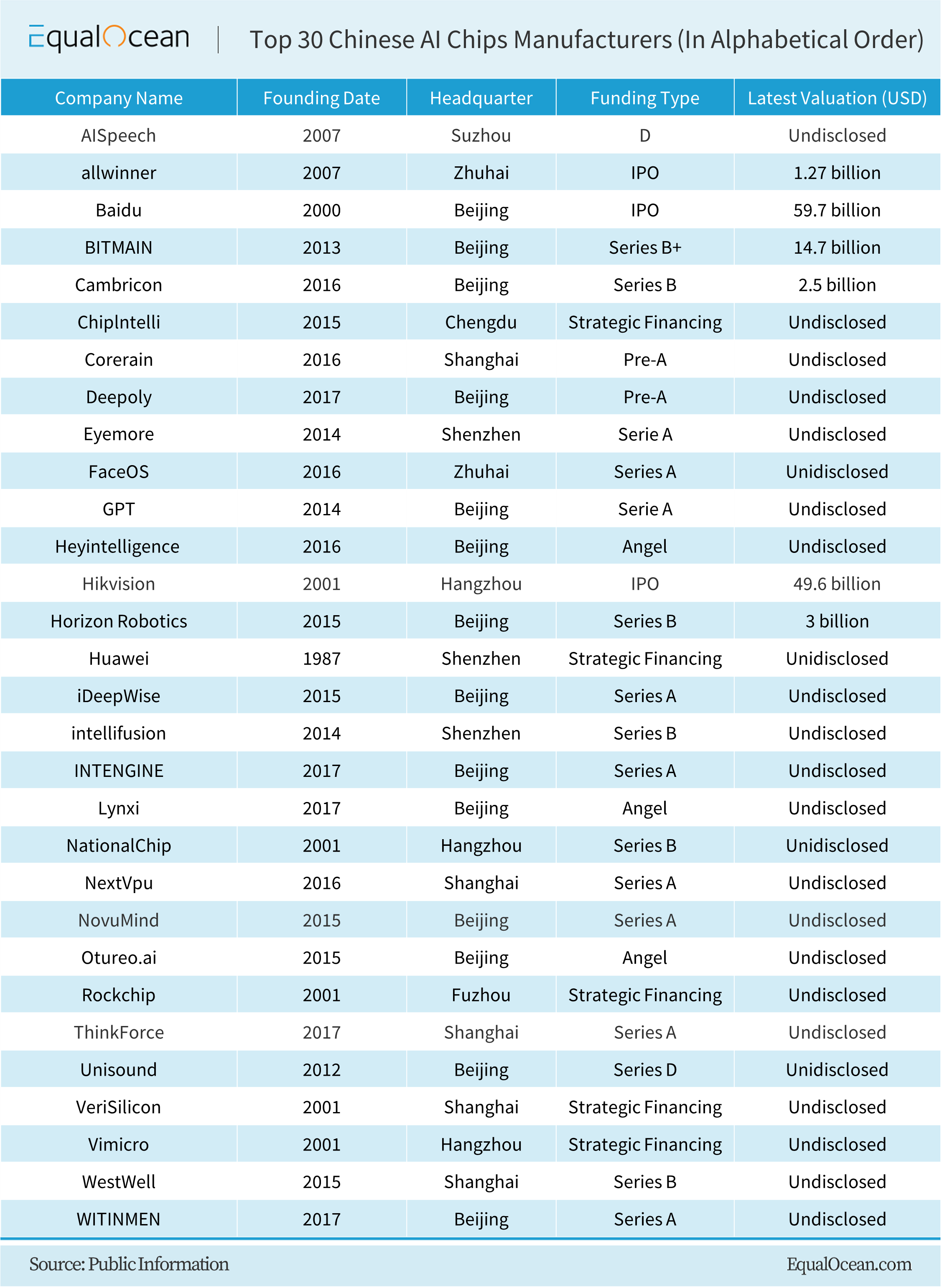 Several factors are concerned while selecting enterprises. First of all, EqualOcean does not cover companies at a very early stage. All the enterprises from the list have a valuation with more than CNY 100 million and growing at a fast speed. For famous AI chip manufacturers such as Cambricon and Horizon Robotics, the valuations are more than USD 1 billion. Plus, EqualOcean believes that the research and development level of the enterprises should be paid attention to. All the enterprises belong to the list have a strong R & D team which has the ability to independently develop the structure of AI chips. Last, all the companies belong to the list are welcomed by the capital market, and during the past 3 years, these companies have completed several series of funding. With these standards, EqualOcean selected the top 30 players in the AI chip industry, all of them has great advantage in technology and financing.

Currently, the artificial intelligence chips industry is in an early stage and all the countries are competing in this field. The Chinese government pays great attention to the AI industry and published a series of policies to support it developing. On the other hand, the massive data and application scenarios would further promote the Chinese AI chip manufacturers. Only with close cooperation and the combination of technology, market and talents could the enterprises stand out in this industry. 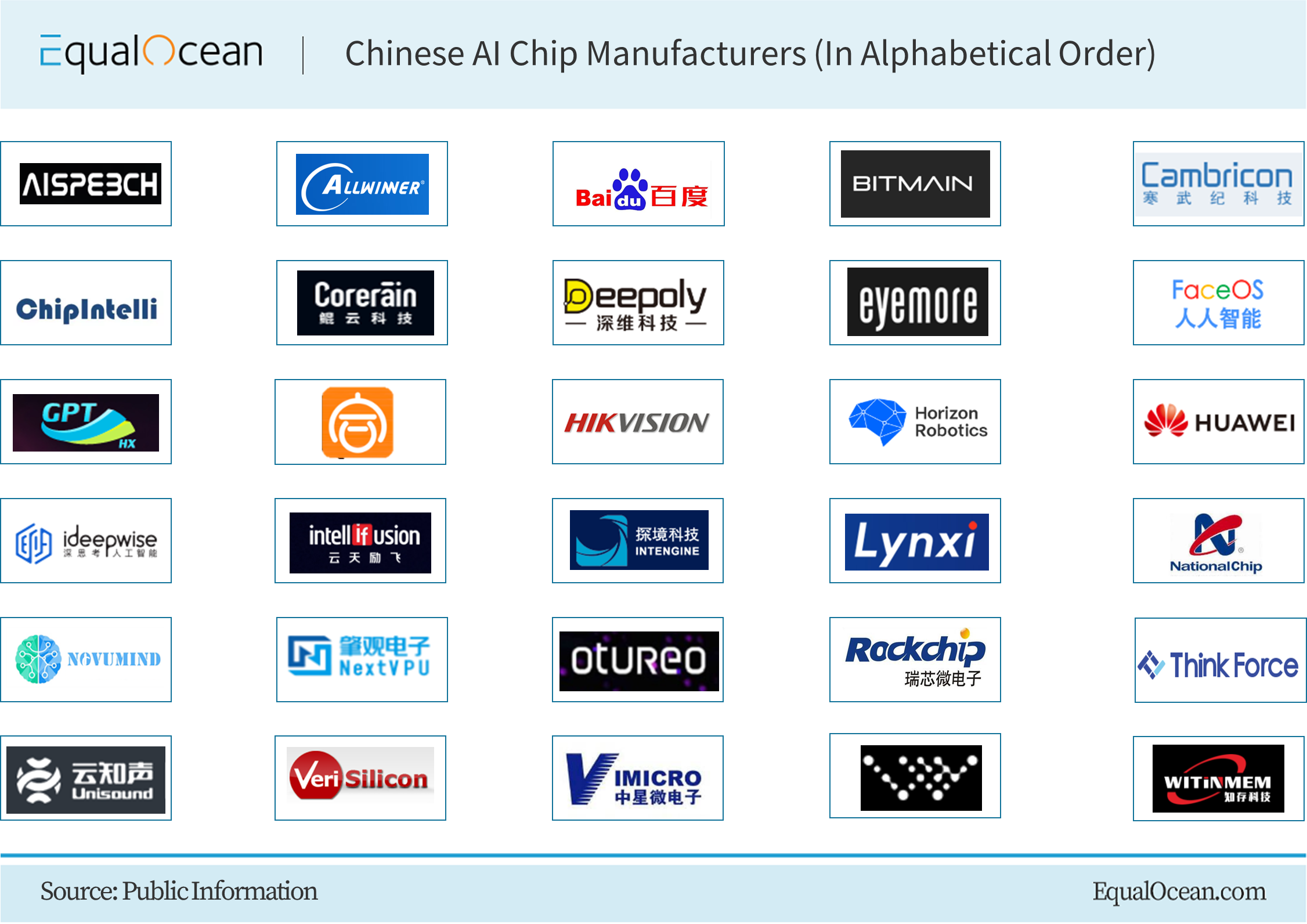 Currently, there is no appropriate definition of artificial chips. Generally speaking, all the chips that meet the requirement of AI needs are AI chips. Actually, under most application scenarios of artificial technology, people could use GPU and FPGA, which are the general chips to achieve artificial intelligence aim. However, with the development of artificial intelligence technology, the specifically designed AI chips would be the mainstream in the future and will totally change the traditional computing structure. The development of AI chips is strategic and meaningful and would also change the competition pattern in the world.

In order to deal with the big data, people used to use the high-performance processor to assist the MCU. However, with the elongation of the time period of Moore's Law, the number of facilities which could be integrated by the processor reached its upper limit, and people need to change the structure of the chip in order to meet the requirement of the increasing data. That’s why it is essential to develop an artificial intelligence chip.

There are three ways to classify artificial intelligence chips. 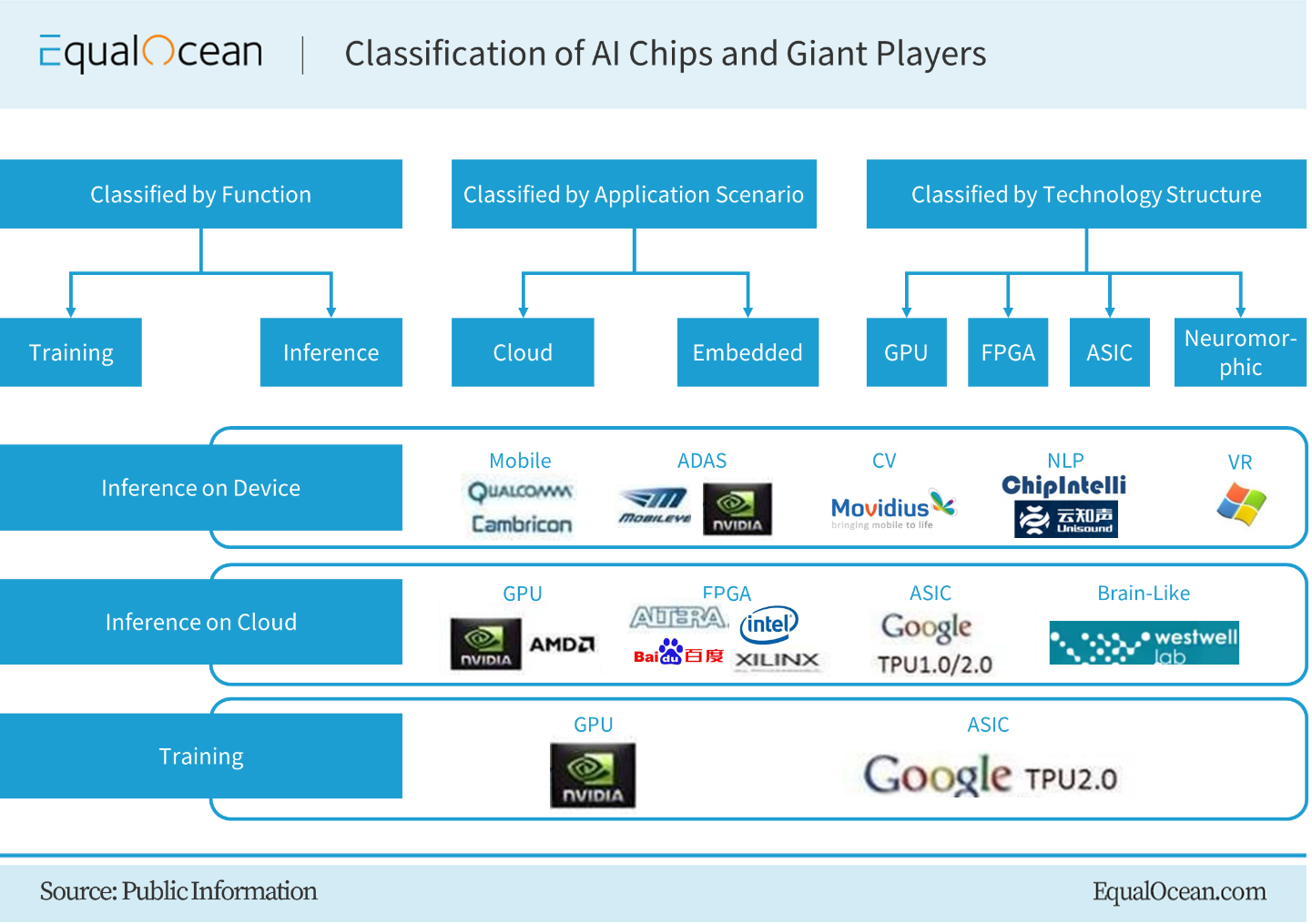 The first one is classifying the chips by its technology structure. In this method, the chips can be divided into 4 types. The first one is the chips based on general chips such as GPU. For example, NVIDIA developed different kinds of GPU to serve different intelligent computing facilities and build the NVIDIA CUDA platform to improve programming efficiency.

The second kind of AI chips is the fully-customized chips targeting on the deep learning algorithm. Due to the large energy consumption of GPU and FPGA, and the largely increasing AI application, it is essential to develop the specifically designed chips for the AI industry. Professor CHEN Yunji (陈云霁), the founder of Cambricon Technology, used to said that with the specially designed codes and store units, it is possible to improve the intelligent management efficiency of the deep-learning model into more than 10 thousand times. These kinds of chips are designed based on FPGA and can be half-customized in order to meet the different requirements of computing. In this field, China has already ranked the top 1 in the world.

The third one names ASIC which is fully-customized for the specific use. The ASIC has advantages in energy-consumption, reliability, and size, especially on the mobile end which requires higher performance and lower energy consumption. However, the ASIC chips cannot be enlarged, due to its technology structure. Google’s TPU and Cambricon-1A are all these kinds of chips.

The last type is neuromorphic chips. In this field, the developing of chips are not only limited to accelerate the deep learning algorithm and achieve artificial intelligence in specific situations, but also develop the technology structure that breaks the Von Neumann Architecture, and solve the general intelligence computing problems. There is a long way to go before the commercialization of the neuromorphic chips, even the massively production of them. However, in the long term, the neuromorphic chips are the ones which are most likely to bring a revolution of the computer industry.

AI Chips Classified by Its Function

The AI chips can be classified by its function and there are two types of chips, training, and inference. The training refers to develop a complicated neural network system by big data. During this process, a lot of marked data would be used to train a related system and require it to achieve some specific functions.

The inference, however, means that by using the model which have already been trained to combine with the new data to get more conclusions. Currently, Google is the only manufacturer which could compete with NVIDIA. However, tradition CPU and GPU manufacturers such as AMD and Intel are trying to enter the training market.

In the AI system, the training and inference are processes which are relatively independent, and they have different requirements about the computing ability. Training requires a high computing performance and a higher accuracy. During the training process, a large amount of data is required to achieve the generality of training in order to achieve different kinds of study task. Inference requires relatively lower performance and accuracy. Inference’s aim is to finish some special tasks and deliver the results to the users. In this way, inference focuses more on the bettering of user experience.

The AI chips can be classified into 2 types by its application scenario, on the cloud, and on the devices. The training period of deep learning requires a large data quantity and a huge computing complexity. In this way, the training process can only be operated in the cloud platform. The cloud AI chips has a strong performance and could support a large amount of computing. In addition, it could flexibly support different kinds of AI applications no matter they are pictures, voices, and videos. Currently, almost all of the Internet AI ability requires cloud AI chips.

On the devices side, there are a large number of intelligent devices and there’s a great requirement difference between different devices. In this way, the inference process cannot be achieved on the cloud platform but can only be operated on the devices. In this way, the devices are required to own the computing ability which requires an AI chip that embedded inside of the device.  These kinds of chips have a smaller size and lower energy consumption, while its performance is not as strong as the cloud chips. Normally, these chips can only support one or two AI ability.

China has become a country with abundant data. It is expected that by 2020, China will own 20%-25% data of the whole world. To manage such a huge amount of data, it is necessary for China to develop its own chips in order to meet the market requirement. With the promotion of both the government and capital, China’s artificial intelligence chips industry increased rapidly. There are several features of China’s AI Chips Industry. Many new kinds of start-ups such as Horizon, ThinkForce, IntEngine, etc. These kinds of enterprises have a leader with a strong artificial intelligence background and a balance between technology development and business. On the other hand, many traditional chips manufactures are entering into the AI chips industry. For example, NationalChip, Vimicro, which used to be the traditional SoC processor chips manufacturers. These kinds of enterprises have a more complete experience in the designing of the front-end and back-end and could do better in product development and testing.

Currently, the main application scenarios of Chinese artificial intelligence chips are security industry. However, the AI chips targets to other fields such as automatic driving, medical and intelligent home are relatively rare. The security industry has a huge amount of data which could help with the training period of deep learning. On the other hand, the security has enough financial support to the development of AI chips which could meet the requirement of its development.

Currently, some of Chinese AI chip manufacturers have already mastered the world-leading technology in some fields of the innovation of AI chip. For one thing, in the basic research fields, China has advantages in memory computing, isomerism and brain-like computing and reconfigurable computing chips. On the other hand, there are many AI talents move back to China to promote the AI chip industry. According to the data from Linkedin, from 2013 to 2016, the annual average increasing rate of the overseas AI talents that graduated from foreign universities and move back to China was 14%, and the annual average increasing rate of the AI talents who had overseas working experience and move back to China was 10%.

In a world, we have confidence in the potential and future of Chinese artificial intelligence. With the abundant data and industries, AI chips have a great market in China. However, in terms of technical advantages, it still requires a long way to go to gain better production. The AI technology is developing rapidly which generated a higher requirement for the AI chips. In the future, EqualOcean believes that both the government and the capital market would give further help to the AI chip industry, and the data resources and technical help would bring the AI chips industry to a higher degree.