We took a look at a load of autonomous car startups that have raised over USD 100 million. The cohort only focuses on startups working on its own tech to break into the passenger L4 autonomous car market. 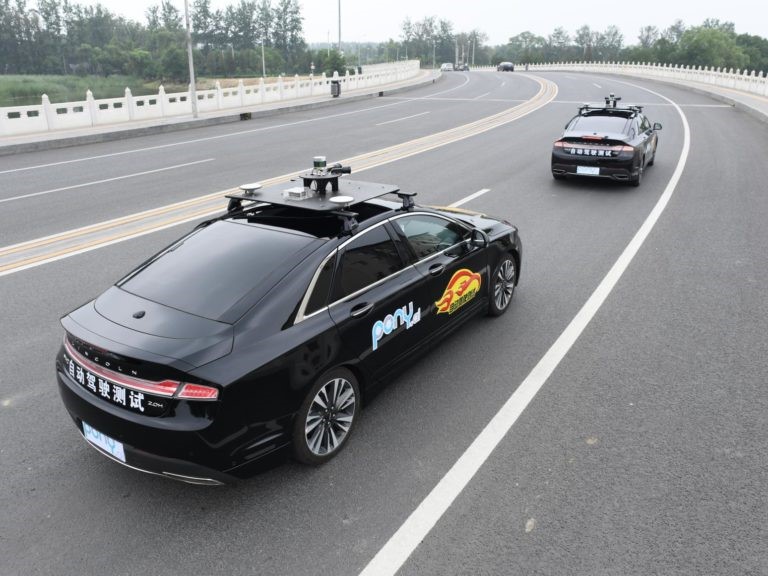 In China, NIO (蔚来) backed-Momenta (初速度) was said to cut 60% of programs and move R&D to Suzhou in 2019. In addition, Roadstar.ai fired its co-founder and chief scientist, ZHOU Guang (周光), due to dishonesty and cheating.

Investors poured loads of money into this driverless car race in hopes that their startups may cross the finish line first. However, is the market beginning to backfire?

We took a look at a load of autonomous car startups that have raised over USD 100 million. The cohort only focuses on startups working on its own tech to break into the passenger L4 autonomous car market. This includes Pony.ai, Momenta, and Roadstar.ai.

These three companies have started testing its self-driving cars and saw some great progress.

However, some of them have a specific commercialization plan while some do not. Some of them fell into the haze while some heading towards the original goal. 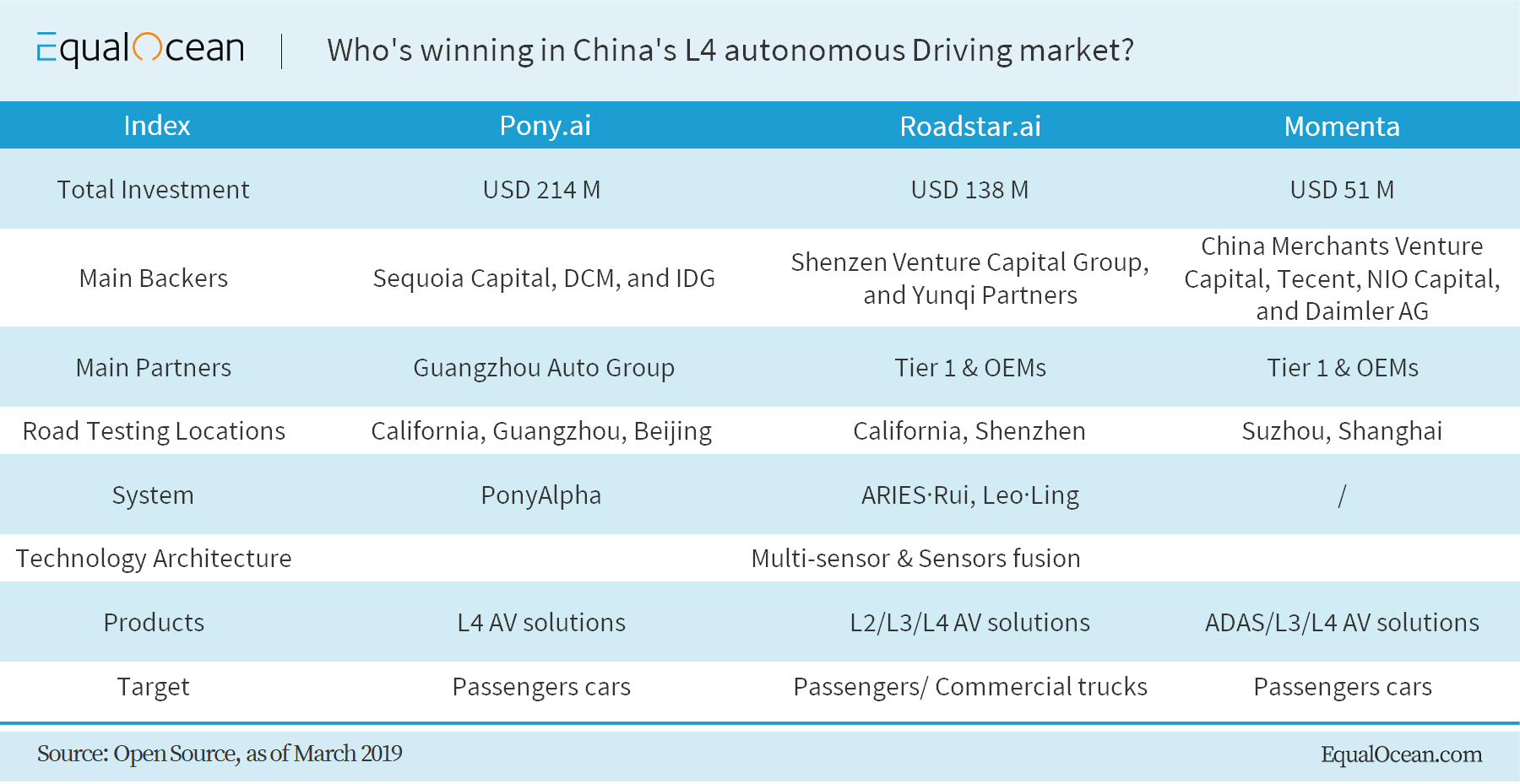 Based in Fremont, California, and  Guangzhou, Pony.ai has a research and development center in Beijing. Pony.ai was co-founded by James Peng (PENG Jun, 彭军) and LOU Tiancheng (楼天城) in 2016, a former Baidu employee and a former Google programmer.

Baidu launched the Institute of Deep Learning (IDL) and started researching on autonomous driving in 2014. Talented programmers from the rest of Baidu’s departments asked to transfer to this team which soon grew from dozens to hundreds of people.

However, Baidu is a huge system with lots of departments and regulations, which inevitably led to the company underperforming in terms of speed, innovation, and technology according to an insider.

On the other hand, the outside capital market began to realize the valuation of autonomous driving startups and was willing to give support, pulling talents from Baidu to start their own business.

Partnered with a Guangzhou carmaker, Auto Group, Pony.ai  launched China’s first public fleet of autonomous vehicles in Guangzhou in May 2018. The company claimed that it planned to increase self-driving cars offering ride-hailing services in the district to 50.

Apart from progress in Guangzhou, Pony is the second company to be granted a T3 license—the highest-level issued in the country so far—after Baidu, which obtained one in March 2018 (Plates have five levels, from T1 to T5).

Baidu and Pony.ai had been working together to persuade the Beijing government to issue road testing licenses before the company was granted one, according to people familiar with this matter.

Pony has launched a WeChat mini-program, allowing users in Guangzhou to hail autonomous taxis since Jan. Currently, only Pony.ai’s employees and a few referral users can use the app (see more in this article). Users can hail self-driving taxis from a designated location to Pony’s offices and other locations set previously by the company. It is quite a big step forward than a simple driverless car testing exhibition.

"It would be easier to conduct road testing under closed circumstances without influence and disturbance from other cars," according to people familiar with the matter.

Pony claimed that it hopes to grow its vehicle fleet from 20 to 100 in 2019 which will increase its data collection capabilities. The company needs to improve basic technological infrastructure to sustain fleets running with high stability performance.

Possessing a perfect model equipped with L4 technology is not enough for a company to prove that its technology is capable of mass production or should be considered for the possibility of reproduction, according to Pony.

Competition is brewing and there is enough reason for an early launch to achieve the first-mover advantage in the autonomous car market. But it must take three steps: testing earlier generation prototype vehicles to small-scale fleet testing and finally large-scale mass production with commercialization, according to Pony.

Details mentioned above show that Pony is currently deploying small-scale fleets and improving rapidly to support a commercial launch in the future.

The company has a multi-sensor approach to blending separate data from multiple sensors—lidar, radar, and camera—together. Its latest configurations comprise of three lidars, six cameras, and an MMW radar, according to the company. When combined together, the full sensor suite can see roughly 200 meters. This enables a wider variety of driving scenarios.

In addition, Pony’s team released its Vehicle Control Center and its in-vehicle interface PonyHI (Pony Human Interface). The Pony.ai Vehicle Control Center enables centralized management, tracking, and dispatching of all vehicles in its fleet. Passengers are able to follow the vehicle’s every move and decision as it identifies, classifies, and plans its next move based on its surroundings through PonyHI.

As we mentioned before, the company conducted R&D and road testing in China and the US. The company uses the same basic system in different countries,  adjusting only for driving habits, traffic rules, pedestrian habits differences, etc.

Too difficult to fulfill A mission?

Pony tends to make predictions on future trends to get itself prepared. For instance, the company reserved space for its software, hardware, and internet control to accommodate for new technologies like the 5G and V2X (Vehicles to Everything) and regulation requests.

The Beijing government asked granted companies to install monitor devices on their vehicles to upload collected data, according to iyiou.com. The company’s ambition is to be an individualized L4 autonomous driving solution provider, which we can tell from its backer and products plan.

Momenta has received Daimler's investment, and Roadstar has released a clear plan that it will launch L2/L3 autonomous driving solutions for OEMs.

Founded in 2017, the company launched an R&D center in Shenzhen and Silicon Valley. Using a similar sensor fusion model, the company focuses on providing a solution for L4 autonomous driving.

TONG Xianqiao (佟显乔), chief executive officer and co-founder of Roadstar.ai, was a former executive in Apple’s Titan program and Nvidia. Three key persons of the company, including the CEO, CTO HENG Liang (衡量) and now-disgraced (see more in this article) chief scientist ZHOU Guang (周光) all once served on  Baidu’s autonomous driving team.

In collaboration with other carmakers, Roadstar aims to produce 200 cars equipped with its self-developed sensor kits and algorithms in 2019. By 2020, it plans to own 1,500 self-driving electric cars to offer ride-hailing services in the core districts of first-tier cities, according to Bloomberg.

Similar to Pony, Roadstar plans to offer its own ride-hailing application for certain users this year, but we’ve never been aware of any news about it yet.

Even though the company has said that their products will be designed for passenger cars, it pointed out that it will consider offering self-driving truck solutions for OEMs.

The company also claimed to have developed an in-house simulation solution, a pair of sensor fusion technologies called HeteroSync and DeepFusion. It’s also known as an "HD RealityMaps" product touted as "providing a 360-degree VR-like vision".

Roadstar claimed more than one million miles of public road testing had taken place as of November 2018. The company touted its latest "modular" Level 4 system called "Leo·Ling". The company claimed that "it’s close to a mature commercial product" at a press conference in November.

We’ve written an analysis article about the company’s struggle in commercialization before, outlining its strong academic atmosphere,  strategic investors, and state-owned background investors.

Unlike Pony, Roadstar has a clear commercialization plan. But it is complicated and has a wide range of products such as offering L2/L3 solutions for OEMs. Therefore, we hesitate to define the company as a pure L4 autonomous driving solutions provider.

TONG once implied that the company’s advantage was its high-definition map system which can turn raw data into data that has decimeter precision in an interview.

Roadstar also planned to explore vertical scenarios such as food delivery that's partnered with Meituan, the company announced in July 2018.

Roadstar and Momenta seemed to be distracted by other opportunities in the autonomous driving industry. “Focusing on too much stuff can make startups less concentrated,” an insider told us.

A misleading story told by DMV?

California’s Department of Motor Vehicles released the latest batch of reports from companies testing self-driving vehicles in the state last month. This sheds some light on the process and level of road testing. We look at the number of test miles and miles per disengagement in California in 2018.

This vague definition published by DMV, however, has allowed AV companies to avoid reporting certain events that, depending on how you look at it, could qualify as a disengagement, according to Sebastian Gogola.

Also, there is no bias for comparison: different scenarios or time are not considered in this report, which means the numbers you see cannot tell a full story about the company’s technology. 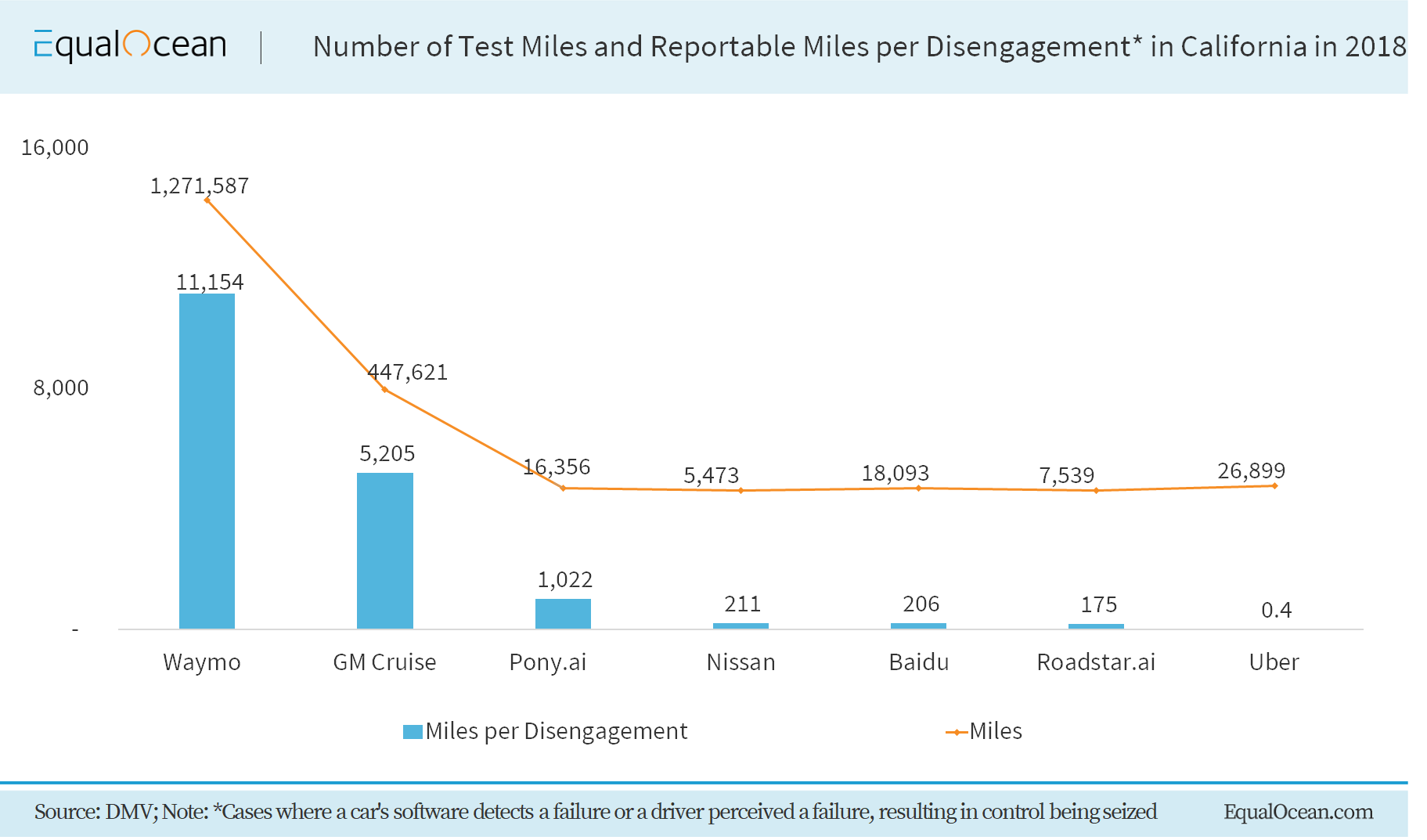 Nevertheless, let’s look at the numbers. Waymo drivers disengaged the auto-drive function once every 11,154 miles and Cruise drivers once every 5,204 miles on average.

Pony is the front-runner among Chinese autonomous driving companies. The company reported human intervention once every 1,022 miles, according to the report.

Baidu was the runner-up among Chinese competitors in the tests, reporting human intervention once every 205 miles on average in its self-driving cars. Baidu logged 18,093 miles in the report.

“It’s better to treat the reported miles and index as a guide and not as the single criteria to judge those companies. We suppose the company with a much higher MPD (Miles per Disengagement) and reported miles did a better job. For example, Waymo and GM Cruise both posted significantly more miles driven and lower disengagement rates than  other companies. Therefore,  we can say they are the best. However, we always need to remember that the total miles and the average number may be deceiving,” an insider of the industry told EqualOcean.

The traditional auto industry’s pyramid structure put OEMs on the top, followed by various suppliers with limited power. In the L4 era, however, the dominance of OEMs will face challenges as auto part suppliers, internet giants, algorithm companies, chip manufacturers, and sensor suppliers have stepped up efforts on R&D and related commercial applications of autonomous driving, according to a report published by Deloitte.

“Ride-hailing companies like Uber and DiDi have access to first-hand customer data and they have interfaces to operate cars. That’s where their advantages lie in this L4 era. Autonomous driving companies could serve as their technology supplier. Actually, tier 1 suppliers, map providers, Lidar manufacturers, algorithms companies, OEMs, and ride-hailing providers all have opportunities to bring fundamental changes to the competitive landscape and earn bargaining power,” an insider in this industry told us.

The Alphabet’s subsidiary, Waymo, announced it will sell its custom Lidar to companies outside of self-driving cars last week. Waymo has been caught in a dilemma: it was valued at USD 175 billion by Morgan Stanley but has difficulties in commercialization.

Selling Lidar is still in its trial phase as it builds a reliable engineering delivery team. However, it isn't helpful in its autonomous driving business. March 13, a consortium that includes SoftBank Group is in its late-stage talks to invest USD 1 billion or more in Uber Technologies Inc.’s self-driving vehicle unit, reported by the Wall Street Journal.