A Blessing and a Curse for China's New Tea Industry

The market growth and consumption upgrade demand are key drivers for China's enhanced tea economy. However, businesses will find it to be a blessing and a curse. 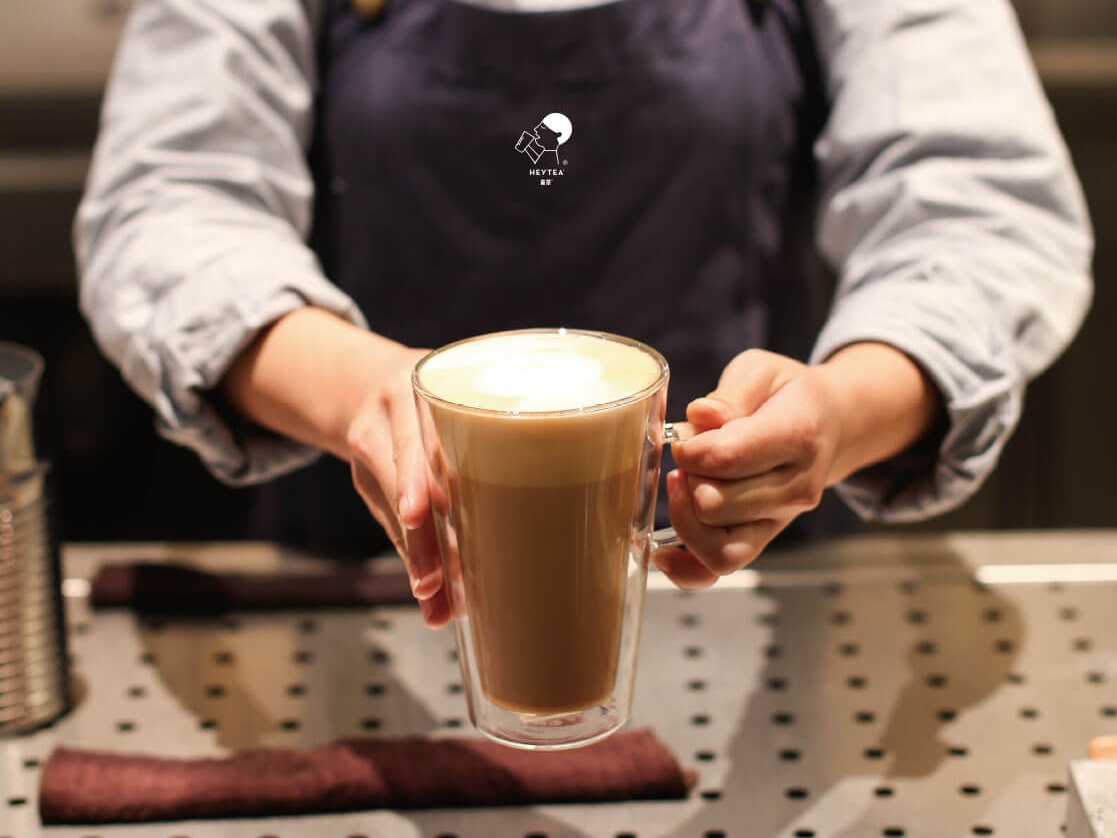 While it’s no secret that tea has a long-standing tradition in China, it has transformed into somewhat of a trend that Chinese beverage start-ups have jumped onto by enhancing China’s traditional tea culture with coffee culture. This combination has rejuvenated China’s milk tea industry, giving rise to many speculations how this new tea industry came to be and the challenges businesses would face.

The Rise of Milk Tea

Milk tea isn’t a new concept in China. For many years, it has been dominated by pearl milk tea, a popular drink that also found its way into the Western market. It wasn’t until after 2010 when beverage start-ups began to innovate the concept by introducing multi-flavoured milk teas.

Two Chinese start-ups, HeyTea (喜茶) and Nayuki (奈雪), are already profiting from this new tea trend. HeyTea specializes in cheese tea, a combination of fresh tea and imported cheese from New Zealand. Its competitor, Nayuki, on the other hand, specializes in fruit-based teas. Both are in its early stage ventures; while HeyTea received its Series B funding, Nayuki is still in its Series A financing round. HeyTea has received RMB 500 million financing while Nayuki’s Series A financing is undisclosed. However, it's leading investor is Tiantu Capital (天图投资), according to CBInsights. 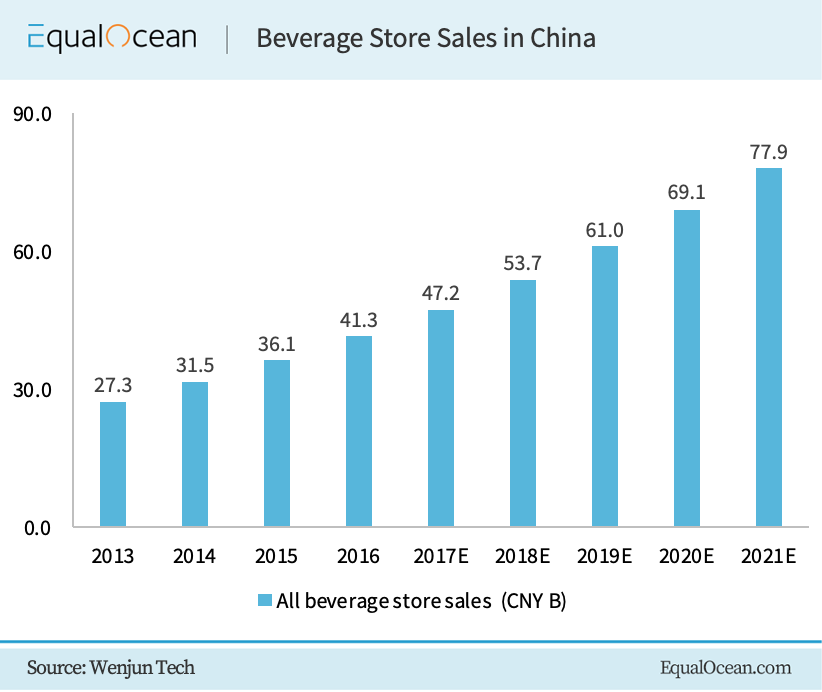 According to a report released by Wenjun Technology (文军信息), the traditional milk tea market total sales from drink shops (traditional tea shops, tea houses, dessert shops, etc.,) was RMB 41.3 billion in 2016, a 14.5 percent YOY increase. By 2021, total sales are expected to reach RMB 77.9 billion in 2021. From 2016 to 2021, the compound annual growth rate of beverage sales would be 13.5 percent.

The demand for the new tea market came primarily from three consumer changes, according to the report.

First, alternatives to traditional tea shops, tea houses, etc. Recently, HeyTea and Nayuki have created a “tea room”, a comfortable space for their customers to relax (see more in this article). It also differentiates themselves from “street milk tea”, a small stand that usually has little to no space for customers to enjoy their drink. The “tea room” is similar to the space one usually finds at Starbucks, portraying how current milk tea shops are adopting coffee culture. Additionally, HeyTea and Nayuki are situated in “premium locations”, locations considered high-class and often visited by white-collar workers or middle to high-income shoppers.

Second, new teas are attractive substitutes for instant drinks. Instant beverages such as instant coffee, brewed tea, and more are being replaced by new tea. As China’s middle class gets richer, they are spending considerably more on food and beverages, according to China’s National Bureau of Statistics. According to HKTDC Research, 60% of respondents indicated that they pay attention to product quality even though it means greater spending. Therefore, it can be argued that willingness to pay for higher prices has gone up along China’s middle class getting richer.

Lastly, consumers are seeking alternatives to coca cola, sprite, and bottled juice which is considered unhealthy drinks. According to Tonghuashun Finance (同花顺财经), the healthy concept is on the rise in the milk tea industry which HeyTea and Nayuki are taking advantage of by providing fruit teas. While the definition of healthy varies from person to person, fruit teas are considered healthier than the drinks mentioned above. However, while jumping on trends is good, it may eventually become a problem due to lack of differentiation. HeyTea attempts to differentiate themselves by offering seasonal fruit teas: depending on the season, HeyTea offers drinks using fruits that are currently in season. When there’s a lack of differentiation, consumers will take pricing, locations, and whether the business does delivery which HeyTea and Nayuki are relatively similar to each other in these aspects.

Both businesses take advantage of WeChat, the largest messaging app in China, to make ordering more convenient. Both use WeChat’s mini program. However, while HeyTea’s WeChat mini program allows customers to buy drinks, Nayuki’s mini program’s is similar to a virtual shop where you can buy gifts. According to an interview with IDG Capital on Medium, monthly delivery orders in Guangzhou and Shenzhen might reach 3,000 to 5,000. HeyTea also plans to “constantly [improve] its delivery service” by providing a “separate cheese bowl for cheese froth and limit radius to within two kilometres (1.2 miles).”

Despite the business potential in the new tea market, it’s also a difficult path to tread as new opportunities arise new challenges. Barriers to entry may appear low but due to supply chain complexity, it’s also a challenge. Opening one store is simpler than starting chains as the management team only needs to keep track of one resource stream. It’s also easier to keep track of quality, not only your final product but also your raw materials. Logistics, storage, and transportation are important factors to take into account. In addition, managers must try to maintain efficient production levels, avoid waste, and decrease costs. Therefore, it’s important to have a strong and experienced management team to manage data. For example, according to an EO Intelligence report, BESTORE (良品铺子), had spent RMB 200 million to purchase an SAP system to help them manage their logistics, warehouses, and stores.

Additionally, developing and establishing brand awareness is difficult when the industry is already established. In HeyTea’s case, there are many articles written about their experience waiting in tedious lineups such as the one by Caixin Global on a high school student’s hour-long wait for a cup of tea. According to the South China Morning Post, and the Financial Review consumers are more than willing to share their experience online, particularly through WeChat. This not only saves HeyTea “millions in marketing costs” but also reflects their popularity in China and the new tea industry.

HeyTea and Nayuki weren’t pioneers in cheese tea. This special beverage originated in Taiwan. However, it was the “thick and frothy topping anointing each drink” that separated HeyTea from the country’s ubiquitous milk tea, according to AFAR. HeyTea was originally known as RoyalTea but was rebranded four years after its debut. In 2018, HeyTea saw positive growth and has doubled its shop number to reach 163 in total, according to China Daily. Additionally, the HeyTea’s expansion into Singapore saw a reported selling 2,000 cups daily.

Nayuki, on the other hand, its co-founder, PENG Xin (彭心) was a former director at an IT company. She and her husband, a businessman, worked to pioneer the concept of pairing tea and bread. Over the last three years since its debut, Nayuki is now situated in department stores in tier one cities. According to Business Insider, “each store generates an average monthly sale of RMB 1 million.